Good evening from the incredibly magnificent Eastern Shore of Maryland!  Wow, what a gem of a late spring day we have had here at the secret location.  We delighted in sunny weather and enjoyed light breezes with temperatures in the mid 70’s.  The weather couldn’t have been any nicer for a spectacular June day on the sunny Isle of Kent.  The only thing that could have made it better would be a chick or two, but I am sorry to report there are no signs of that in the immediate future.

When I wrote my “What A Difference A Day Makes” blog, I had no idea how aptly named it would turn out to be.  What a difference a day did make, so sad.  Our third and final egg turned out to be nonviable, almost certainly due to the brutal crow attack earlier in May.  At the time I wrote that blog, there was still hope for a hatched chick, as the final egg was in the nest with Audrey, who was in incubation mode, assisted by Tom as the back-up incubator.  The fishing was good, the nest was well-maintained and the optimism was palpable. The condition of the third egg has made a big difference in possible outcomes at the nest this year.  When we received our two dear foster chicks in June 2015, Audrey was still sitting on three nonviable eggs, and the eggs were being tended around the clock.  In deciding whether or not to place the foster chicks with Tom and Audrey that June, the nest fidelity created by those eggs was a big determining factor in allowing the placement.  Losing nest fidelity this season is not a positive piece of the foster puzzle.  But it’s not over til it’s over, although the chances for a foster are slim at this point.

Tom and Audrey are still very close by the nest when not actually in it.  I have been observing a very interesting phenomenon.  Our loyal osprey pair has been spending a significant amount of time together in some of their usual solo haunts. Take a look! 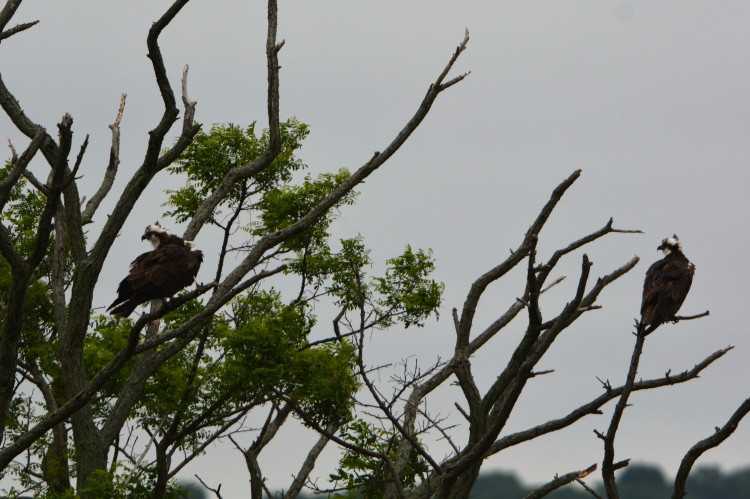 Something has caught their attention, and it doesn’t appear to be Mrs. COM (but probably is) 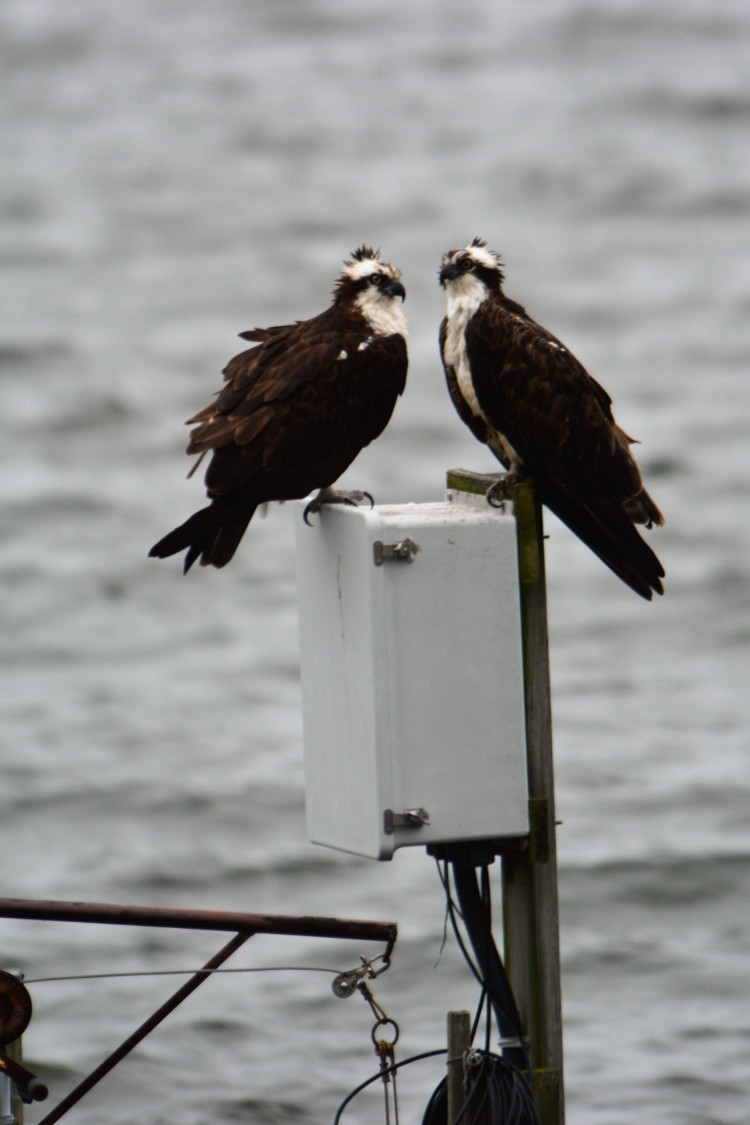 Togetherness on the electrical box at the end of our dock. They both look a little damp

Audrey is doing what she does best, squawking at Tom. Roger is probably glad he doesn’t have ears. Tom seems to be thinking “If I ignore her, maybe she’ll go away”.  So much for togetherness

My new neighbor with his new boat is probably doubly unhappy about the state of his boat covering. 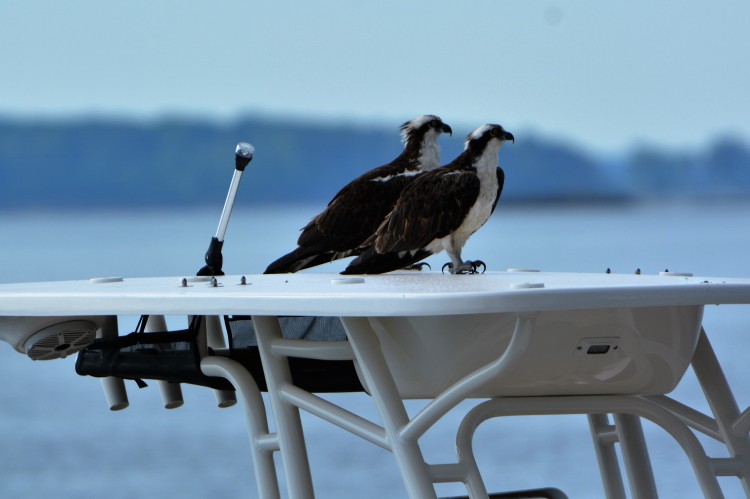 Such a handsome couple. I was waiting for a double poop shot, but received no cooperation

If one boat is good, two boats are better: 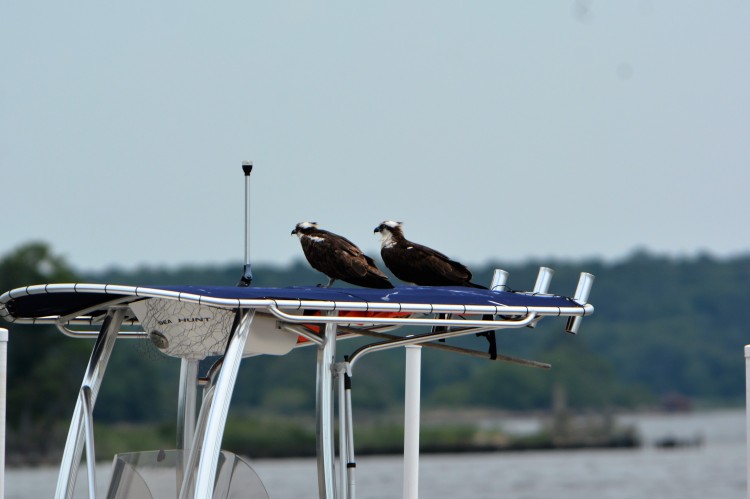 Tom and Audrey add an artistic touch to another neighbor’s boat.

Let’s go for the hat trick!

We don’t want to leave COM out! His boat has such a nice dark green cover

In the end, there is nothing like home sweet home:

Tom on his favorite nest support with his faithful mate near by with her yap shut for once. The nest looks so good, makes me so sad

Tom still on one leg thinking “I knew it was too good to last, there she goes again”. Roger, save me!!!

Tom doesn’t have anything over Audrey in the one-legged department: 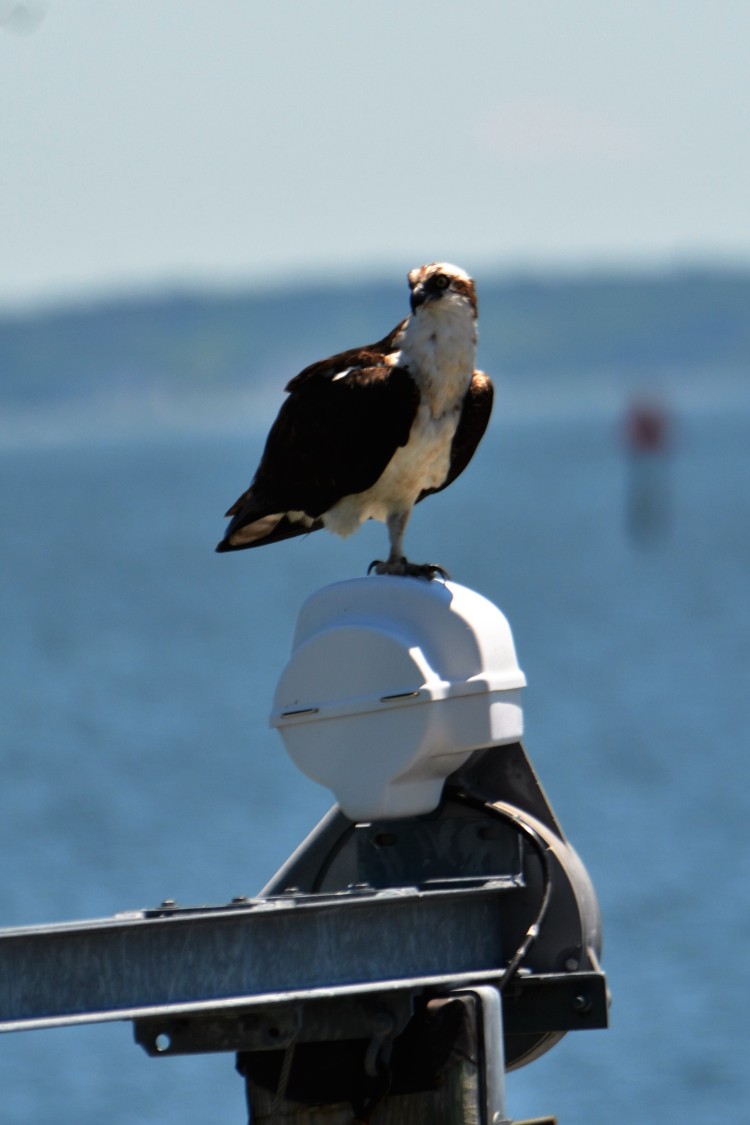 Aargh, matey! I must have been a pirate’s parrot in a previous bird life. All I need is an eye patch

Calico Tom The Fishing Fool has been living up to his name:

Enjoying a fish snack on another favorite haunt, the swim ladder two docks to the south 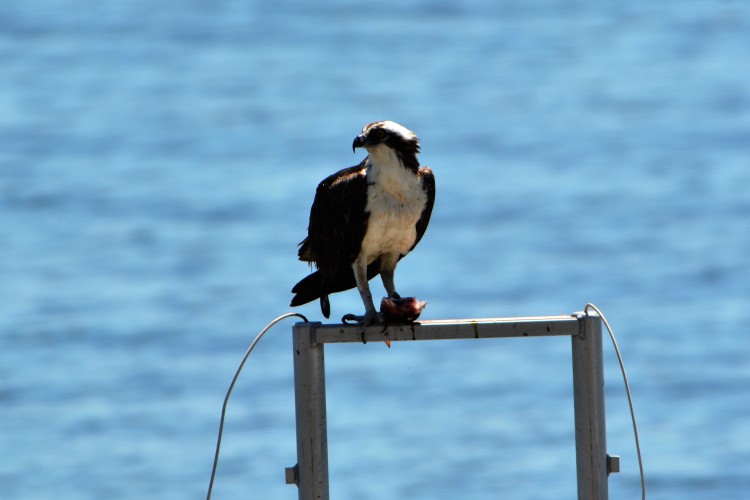 The lighting isn’t very good for photos, but Tom can see his fish just fine

Back to the nest with my fish, get that crazy woman away from me!

Audrey grabbed the bottom half of the fish, and got out of dodge while the gettin’ was good

This photo makes me smile:

Is anybody in there?

Another fish bites the proverbial dust when Calico Tom The Fishing Fool comes to call, and another visit to the swim ladder:

What do you think of these wings, Mrs. COM? Bet you can’t catch me!

Tom has had it with Mrs. COM, takes his fish and heads north to be alone

As I mentioned earlier, today was one of the prettiest days we have had this spring at the secret location.  I woke up to a retching cat around 5:00 a.m., and happened to look out the window at a lovely sunrise.  Although I could have easily turned over, closed my eyes and let nature take its course outside, I decided to make you all proud.  I was a vision of loveliness in my pink robe and flipflops on the end of the dock.  I am sure the watermen who were out crabbing were blinded by my ethereal presence.  You can decide whether or not you want to thank Felix for coughing up that hairball at 5:00 a.m. 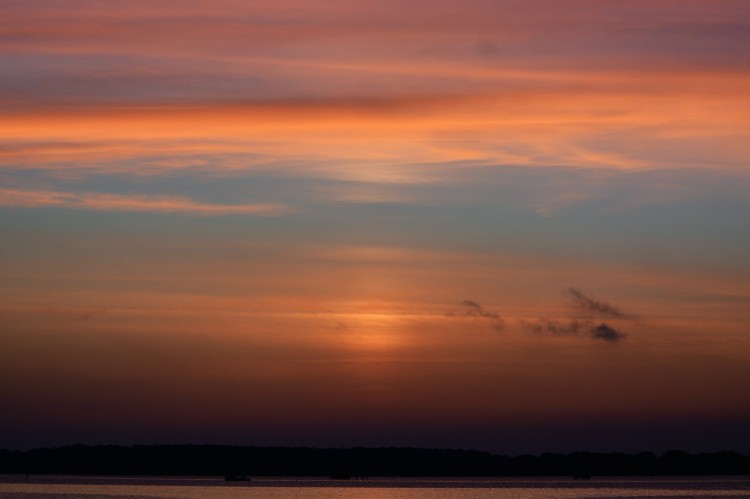 Sunrise at the secret location on Sunday morning, June 4th 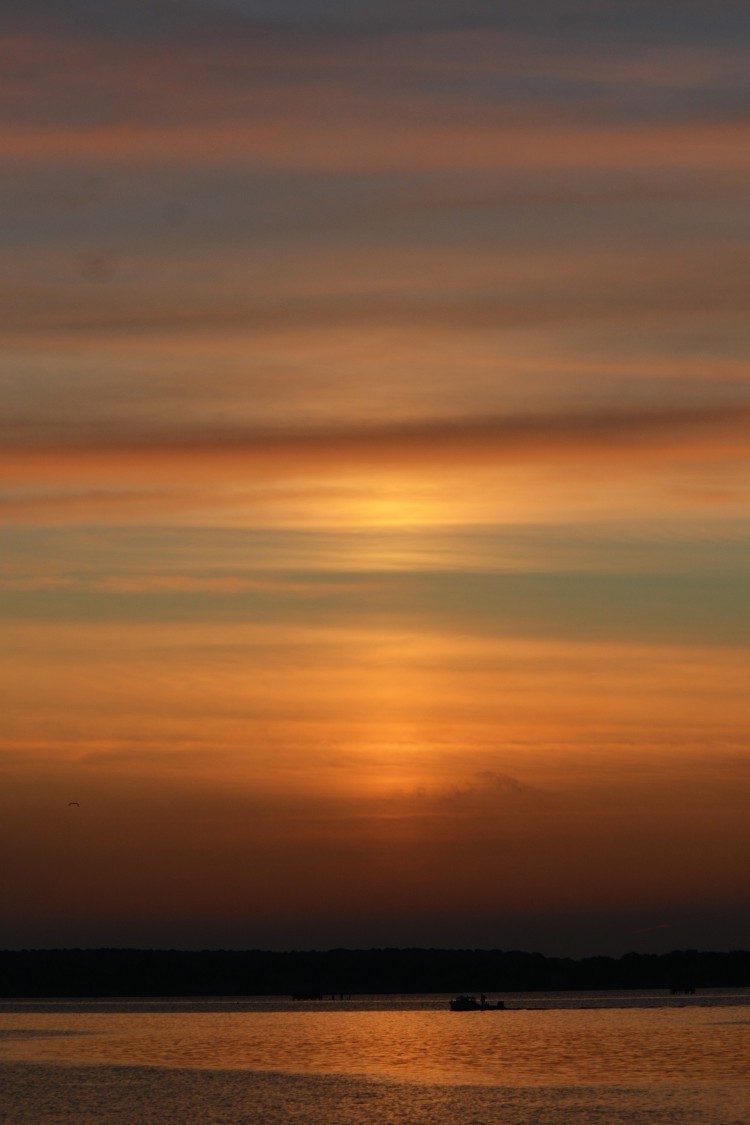 Do you think the waterman has his binoculars trained on me?  If not, he’s missing his opportunity to gaze upon my pink robe

Tom was out fishing, as he frequently does early in the morning.

You’ll have to take my word for it, this is Calico Tom The Fishing Fool with his morning breakfish

Audrey was patiently waiting for her share of breakfish:

Audrey on the nest just after sunrise 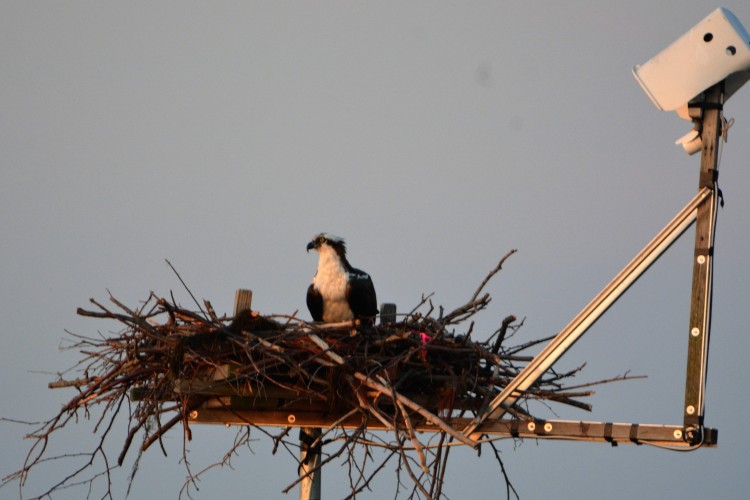 Waiting for the fish delivery man early on Sunday morning 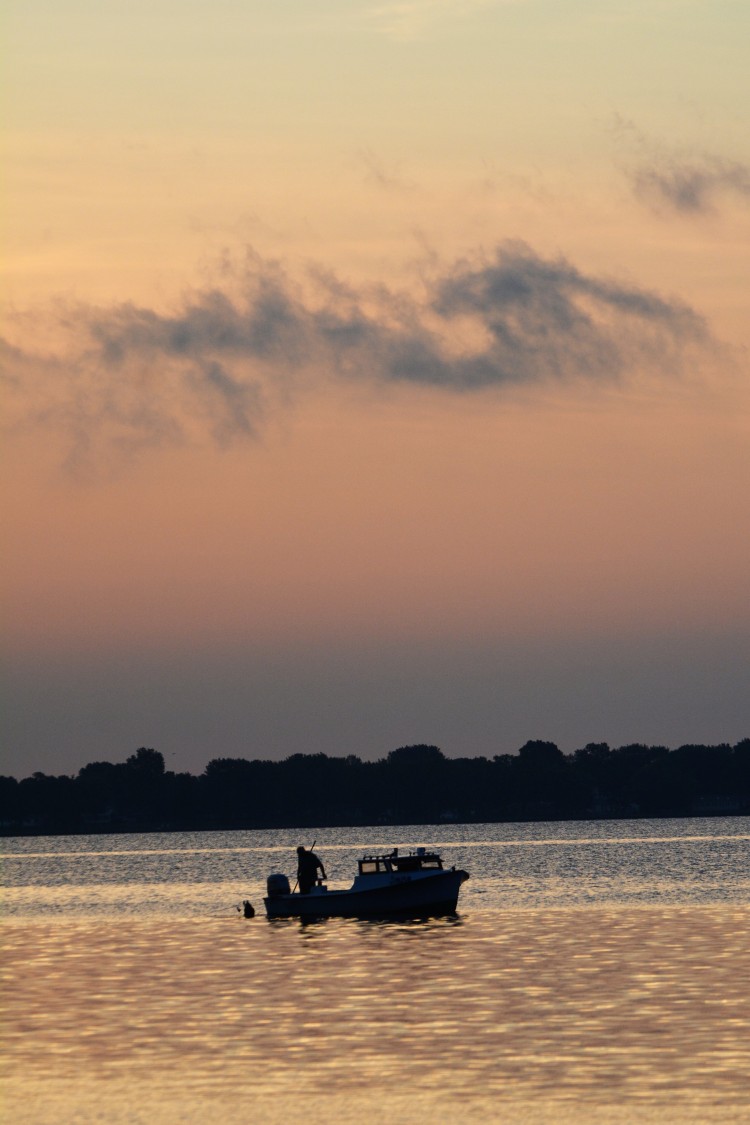 I don’t think the waterman was paying any attention to my pink robe, he had crustaceans on his mind

As I was leaving the dock, I noticed a friend observing me from Osprey Girl’s boat davits:

Mother Nature has not been kind to us the past couple of osprey seasons, but especially mean this year.  I guess we have to take the good with the bad, what choice do we have?

Here is the good:

Before I close, I want to comment on the situation at the Severna Park nest, where the littlest chick is being pecked by an older and bigger sibling, and doesn’t seem to be getting as much food as the other chicks.  For those of you who were with us during the 2013 season, you probably remember that we had the same situation with our youngest chick, Ozzie.  We were all sure that Ozzie would succumb to the lack of food and attacks from siblings.  I also wrote a couple of blogs that addressed the situation.  But in the end, Ozzie thrived and lived to fledge with his siblings.  He was also the subject of Ozzie’s rescue, when he became tangled in fishing line and was freed by COM.  Dr. Spitzer discussed the third chick problems in the blog “Reflections”, published on June 5, 2013.  There are also other references to the third chick, who was eventually named Ozzie, in several other blogs from the 2013 season, which are available in the archives.  Take a look at some of the blogs, but particularly “Reflections”.  Remember, our Ozzie made it, so keep your fingers crossed for the Severna Park third chick!

That’s it for tonight.  I will keep my camera handy, and for your viewing pleasure, will memorialize what Tom and Audrey are doing as empty nesters.

Until next time, we remain-