Good morning from the spectacular Eastern Shore of Maryland!  Well, I thought I had better write the wrap-up blog for 2015 before the 2016 season officially starts.  The camera will be leaving the swan viewing area for the osprey viewing area the week of March 7, just around the corner. I hope you have enjoyed watching our beautiful swans and mooching geese while patiently waiting for the return of Tom and Audrey.  Winter is passing us by, complete with a blizzard and much welcomed visits from Osprey Girl (who made Dean’s List her first semester at the University of Delaware, yippee!).  This official wrap-up blog will touch on some of the highlights of the 2015 season, with special emphasis on the banding operation that took place in July.  For further details and more photos chronicling the 2015 season, you can go back to those blogs to refresh your memory!

As you may recall, we had a very eventful 2015 season. We had drama from the very start, with a flurry of activity surrounding who would be the King of the Castle (not really a castle, but the osprey nest, of course). Calico Tom, the fishing fool, won the honors and became the man of the hour. He performed his pre-fatherly duties with gusto, and Queen Audrey presented Tom and her loyal followers with three lovely eggs. Weeks of breathless anticipation followed, but as the window of opportunity for each egg to hatch passed without new life, a deep gloom fell over the kingdom.

In June, our melancholy was about to come to an end.  Dr. Paul Spitzer, our resident osprey expert and dear friend, suggested that we place a foster chick in need of a home into the nest, with some very specific parameters that needed to be followed as to the age of the chick.  The Chesapeake Conservancy made contact with Craig Koppie, a raptor biologist with the U.S. Fish and Wildlife Service, and the rest, as they say, was history, with not one chick, but two!

These are our two foster chicks on the day they arrived before they were placed into the nest.  Remember, you can click on each photograph to enlarge it for your viewing pleasure:

Our foster chicks, yet unnamed, taking a look around:

Craig Koppie placing the Foster chicks in the nest. Audrey is on high alert

Tom heads back to the nest with a stick.  He had no idea of the surprise in store for him! 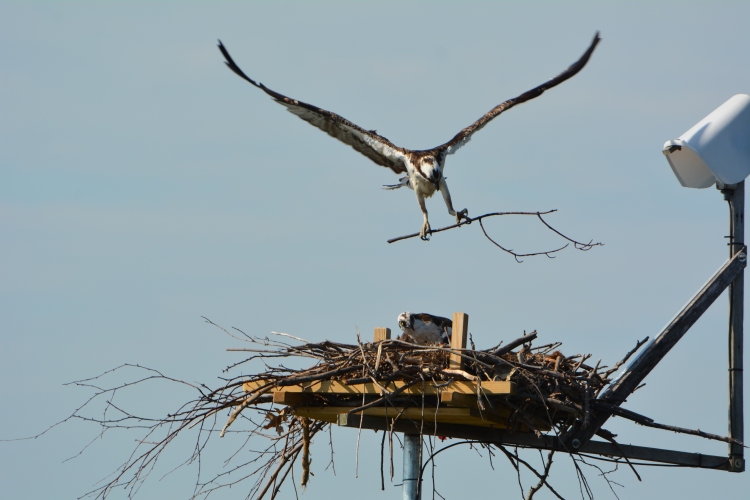 What a glorious day in the continuing saga of 2015!

Life went on at the nest.  As usual, COM aka Mr. Fixit, was frequently fixing something at the pole.  He takes very good care of the osprey pole, camera and nest.  We all owe him a huge debt of gratitude for his devotion to our favorite osprey family:

COM adding support to the pole to avoid rotation, which plagued the nest pole during the early part of the season

We certainly had a lot of excitement in July.  The month started with a beautiful summer day:

A beautiful summer afternoon at the nest

We thought the real excitement in July was to be on the 17th with Craig Koppie banding our two foster chicks.  Little did we know what was to occur a couple of days after the banding: 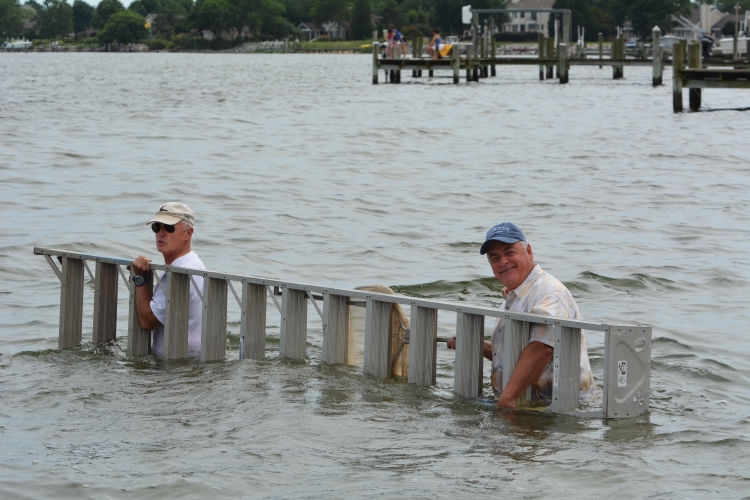 COM and Craig setting up the ladder

First chick being removed from the nest for banding 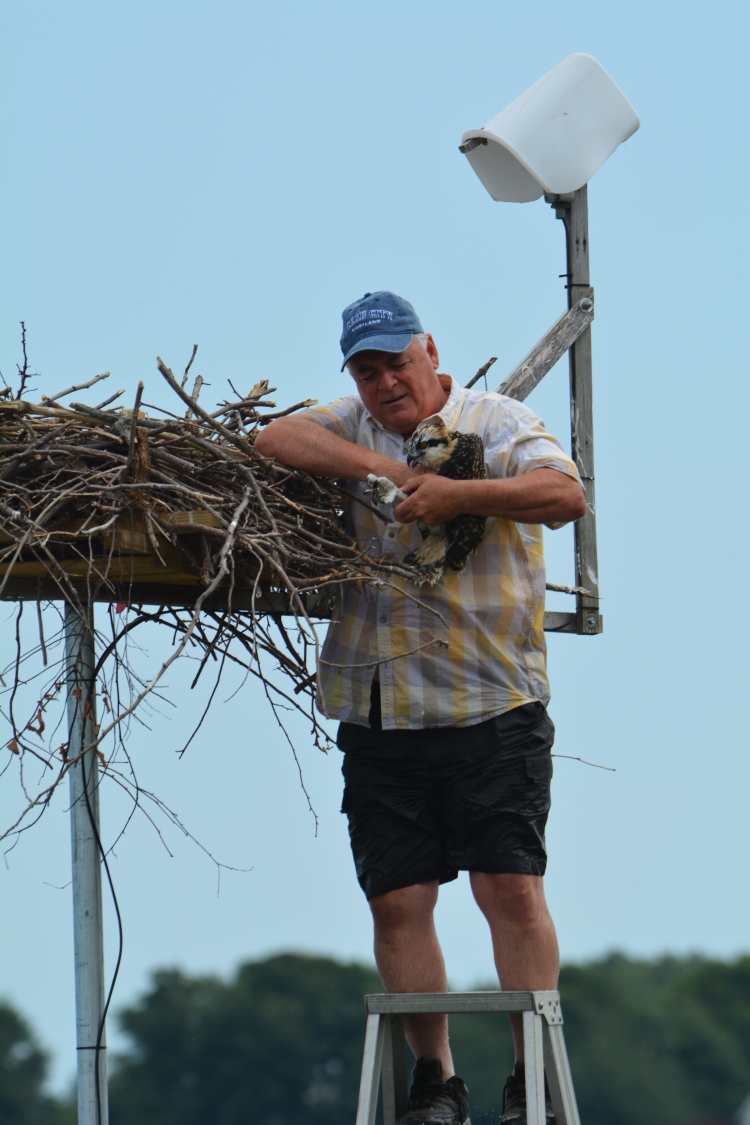 First package ready to go down the ladder

OUCH! A big beautiful baby is bloodying a banding biologist. Hey, that would make a great title for a blog….. 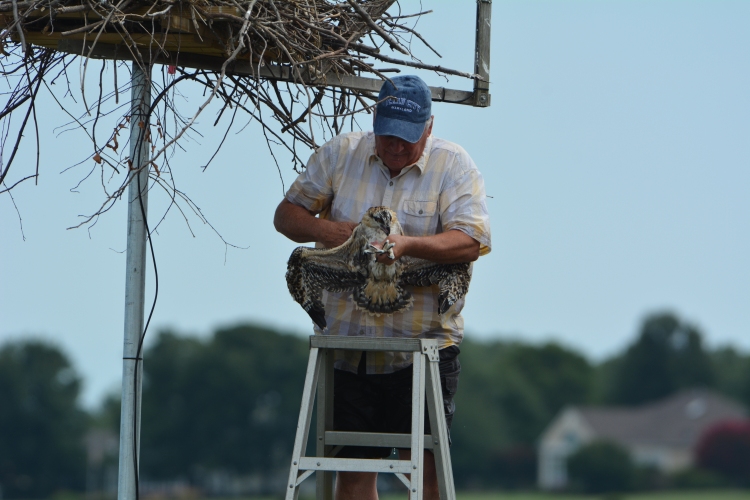 Stand back, I’m an eagle! 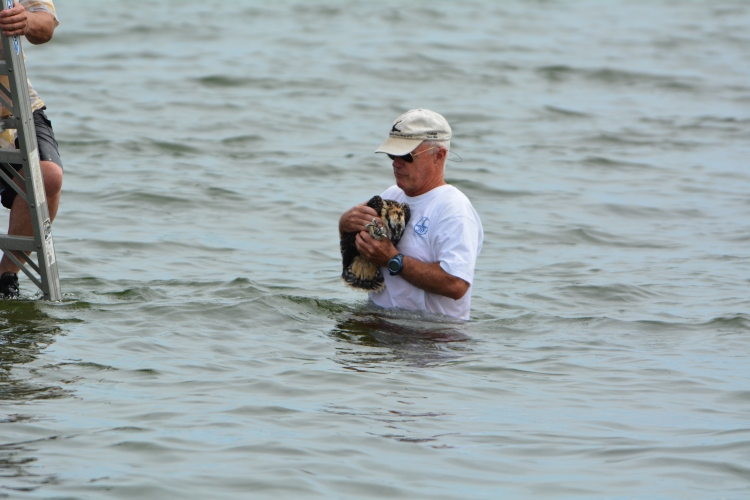 COM is a good helper. One down, one to go

Next victim! On to number two.

Sure wish I knew how to fly, thinks the young osprey

Escape is not an option

Birds of a feather flock together, and I am not talking about the ospreys! 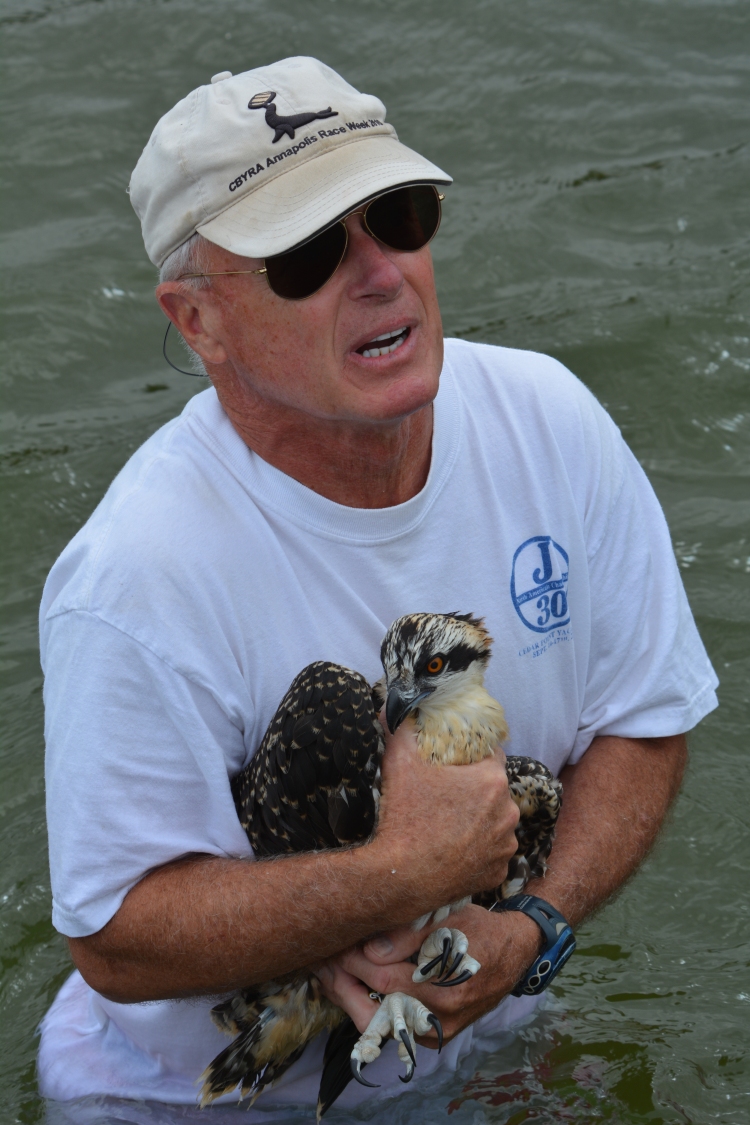 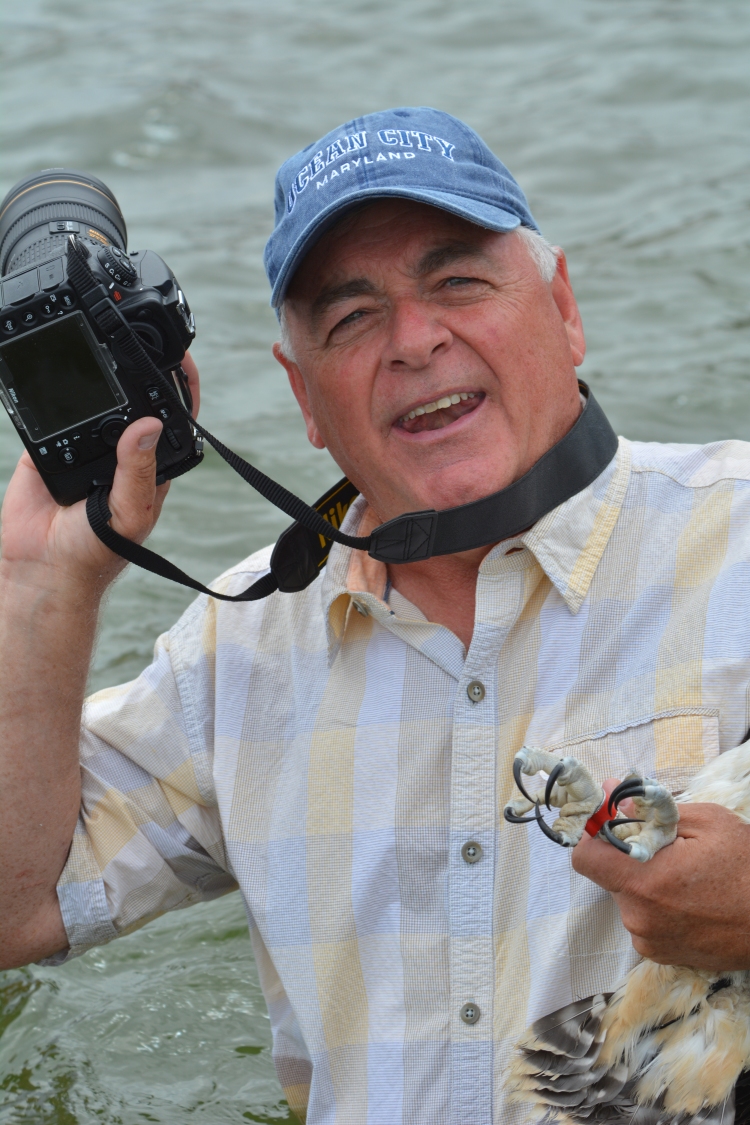 Craig Koppie with the red banded chick, soon to be named Montana, who appears to need a manicure 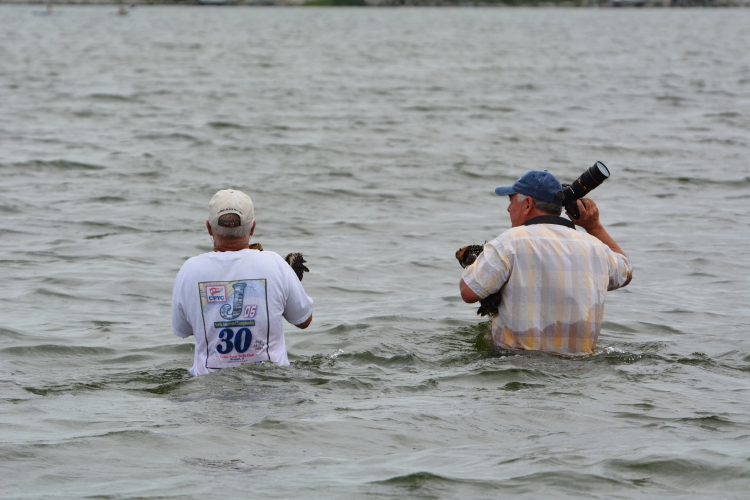 COM and Craig wading back to the nest with precious cargo. Don’t get that camera get wet!! 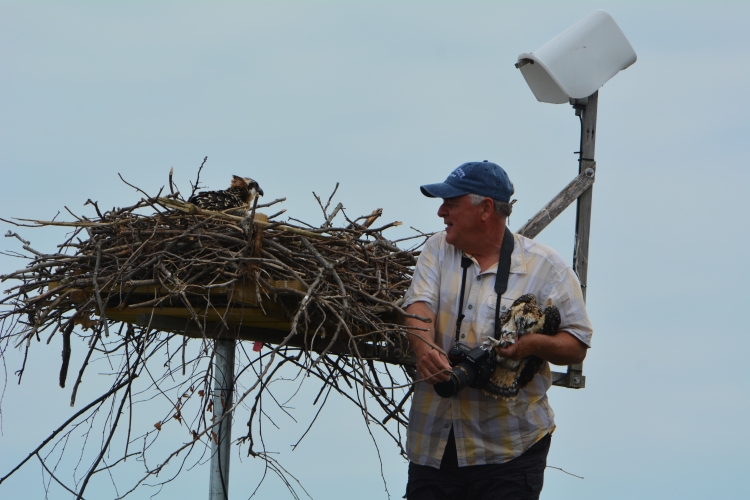 Montana in nest, Maine ready to go back

I know that we can all agree that the banding of the soon-to-be named, rapidly growing chicks made it incredibly easier to differentiate between the two chicks as the season progressed.  Many thanks to Craig Koppie, raptor biologist extraordinaire and COM, his faithful helper. Photo credits for the banding go to Teena Gorrow, as Mrs. COMomma was at work attempting to fill the college account.  By popular vote later in the season, the red-banded chick was named Montana and the yellow-banded chick was named Maine.  These names were chosen by the camera watchers/blog readers in memory of chicks in Maine and Montana that perished very early in their young lives.

Just as I was getting ready to write a blog about the banding, an interloper appeared at the nest on July 19, just two days after the banding.  We really thought we were through with visiting strangers and drama for the 2015 season, but it was not to be.  Enter E.T., although he wasn’t named at the time:

First photo of the intruder, soon to be known as E.T.  He is at the far right closest to the camera.  Maine and Montana are hunkered down, and Audrey is confused.

Tom arrived back at the nest and a big surprise was waiting, another hungry mouth to feed:

Someone is not happy with the new arrival. Yes, we are talking to you, Tom

E.T.’s first day in his new digs. The whole family is perplexed, even E.T.

The working theory on the arrival of E.T. was that he was a fledging from another nest in the area who landed with us and decided he liked the new digs.  Our E.T. gave us oodles to talk about and much entertainment for the rest of the season.

Here are some other favorite photos taken in and around the nest during July 2015:

Super Full Moon rising over the nest. One of COM’s marked sticks is making its presence known

The same full moon as the evening progressed. One of our infamous Full Moon Dock parties was in full swing at the time, with lots of howling going on!

July thunderstorms. Osprey Girl took some incredible photos that night.  This one includes the osprey pole, complete with osprey

The summer continued with Maine, Montana and E.T. learning to fish and fend for themselves before heading on their arduous trip south.  We worried at times if they would ever perfect their fishing skills, and the youngsters did not let us down:

Learning to fish successfully. Two of our juveniles in the big tree, each with their own catch. The crows are looking for a hand out.

Oh, bittersweet September.  Some of our friends were on their way, but there were still some ospreys around.  We consoled ourselves with views like this behind the nearly empty nest:

October was a fun month.  We had our end of season gathering, aptly named The Flocking.  The many attendees ate and drank and told tales of the summer.  Dr. Spitzer spoke to us, and was as entertaining as ever. A poster put together by one of our faithful camera watchers/blog readers, Featherdog, was a popular item.

The happy Flocking attendees! Some had already left before the group photo was taken.

Dr. Spitzer regaling us with tales of the osprey. He is a plethora of osprey knowledge, and we are so fortunate to have him in our corner!

There were always new and spectacular things to see at the secret location, even after our ospreys went South for the winter.  Here is a favorite December photograph: 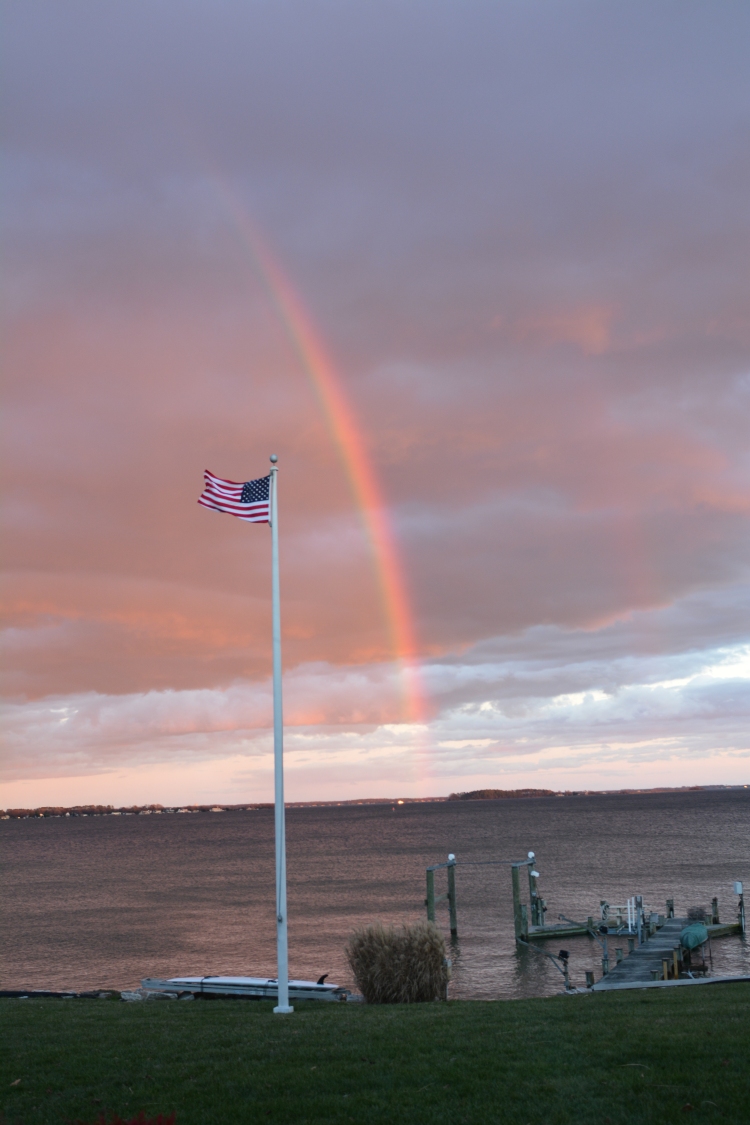 A rare December rainbow at the secret location. Take a look at the extremely high tide, up to the bottom of the dock

All good things must come to an end, as our 2015 season did.  We leave you with a scene from December: 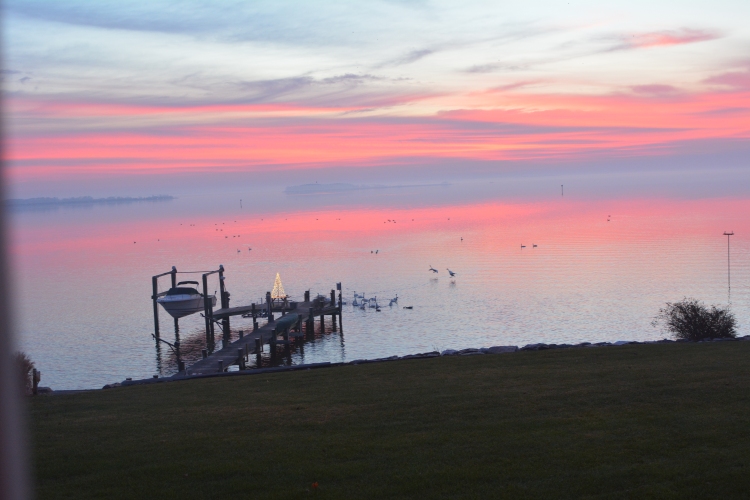 So another successful season came to a close, our most unusual yet.  From March through October, we laughed, cried, oohed, aahed, smiled, frowned, wondered and worried.  In another couple of weeks, the cycle will begin again.  Who knows what 2016 will bring?  Will our faithful Audrey and our Calico Tom return to start another family?  Or will we be met with some new osprey friends fresh back from their South American travels?  Stay tuned, we will know very soon!

Thanks for staying with us, and we look forward to another wild and wonderful season with you, our faithful camera watchers and blog readers!

We hope to see you all at the annual Welcome Back Osprey Party on April 19.  Craig Koppie will be the speaker.  Details to follow.