Good morning from the hot, muggy Eastern Shore of Maryland.  We have had some very uncomfortable weather here at the secret location the past couple of weeks, and I always feel so badly for our ospreys during these brutally hot days.  There have also been some very heavy rain storms, replete with gusty winds, thunder and lightening.  Our big excitement since the last blog was the announcement of Chessie’s name, then the banding of our very feisty young osprey.  As you have probably noticed on the ospreycam, Chessie has been catching a lot of air during her training sessions, and is very close to first flight.  A couple of nights ago during a big storm, she was hovering up so high that I felt sure a big gust of wind was going to carry her away from the nest.  My heat was beating wildly watching the potentially harrowing situation unfold.  I was so worried that I had COM get his lifesaving gear ready and he put on his bathing suit in case we needed to initiate a rescue at sea!  Fortunately, Chessie came down in the nest, but we were really, really worried about her well being that evening.

I have decided to dedicate this blog almost entirely to Craig Koppie and Chessie, the stars of the recent banding.  Of course, COM will get Best Supporting Actor, and I will designate myself Chief Historian of the event.  I was at work the day Maine and Montana were banded last year, so was very happy to be present this time to memorialize the day. There are photos galore, so without further adieu, here is the story of Chessie’s banding in pictures and words.

A couple of weeks ago, as Chessie was getting bigger and bigger (quite rapidly, it seemed), COM contacted our favorite raptor biologist, Craig Koppie and inquired about the possibility of banding our miracle chick.  As Craig tells the story, he took a look at Chessie’s tail, and decided he better get out to the secret location without delay before we had a fledging on our hands. On Monday, July 11, Craig came out with his bag of tricks, and the adventure started:

Craig and COM prepare for the banding

Audrey and Chessie are in residence, but Audrey is sounding the alarm and Chessie is keeping a low profile:

Audrey is keeping a watchful eye on the preparations

As COM and Craig carried the ladder through the water to the nest, Audrey decided it was time to vacate the premises.  Since Chessie can’t fly yet, she was on her own:

Audrey takes off leaving Chessie to her own devices

Craig and COM are carrying the ladder out to the nest. COM is keeping an eye on Audrey, who is circling them while protesting loudly

Audrey was not happy with the intruders, and kept circling and making a series of loud, unhappy calls: 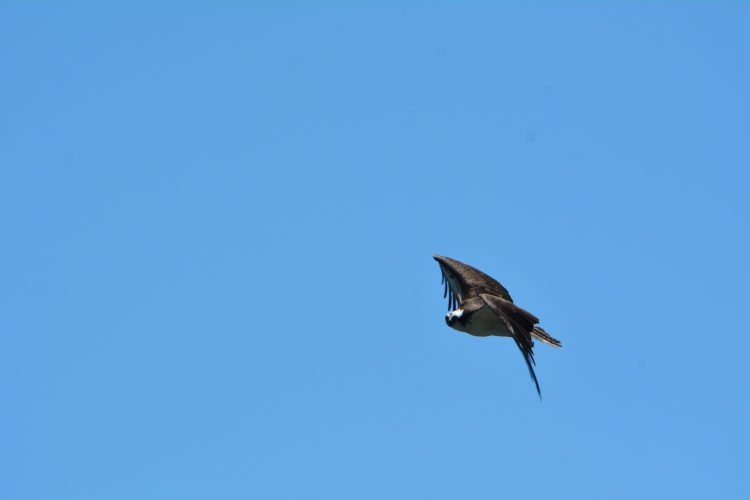 Audrey in flight while keeping an eye on the intruders 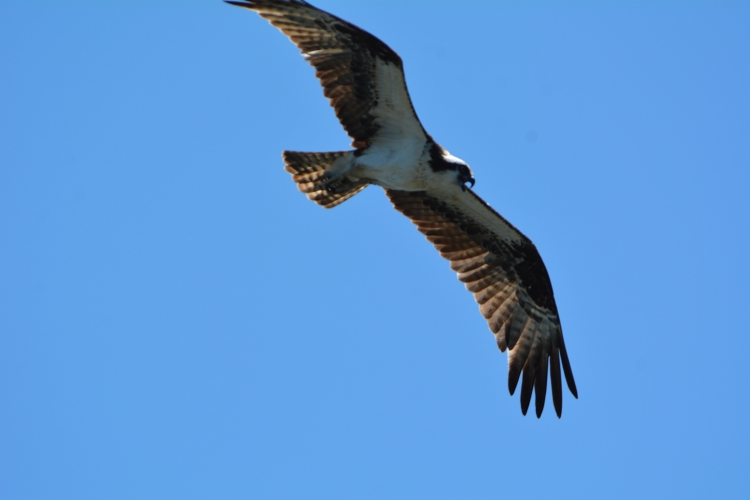 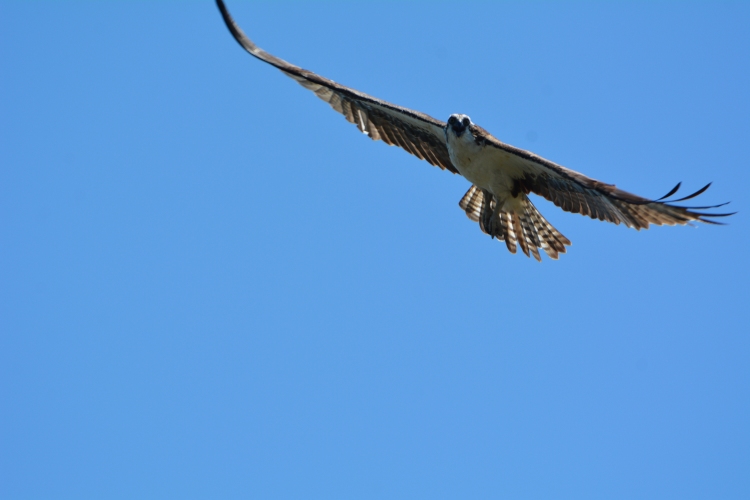 “Should l dive bomb them now or later”, thinks Audrey

Meanwhile, COM and Craig put up the ladder, all the while keeping an eye on the perturbed Audrey :

A discussion ensued as to the proper placement of the ladder.  Audrey has continued to circle and protest: 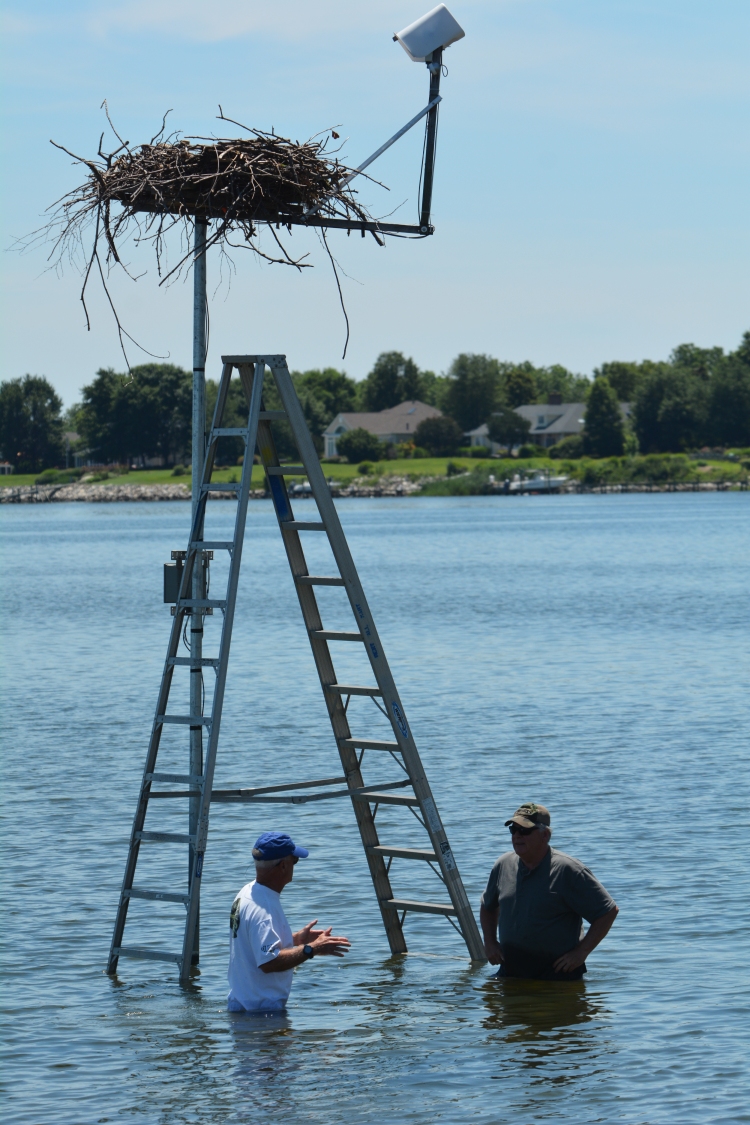 A very wet conversation. Maybe they should have talked about this before they got in the water!

COM goes back to the dock to retrieve a box in which to carry Chessie back for banding.  Craig remembered that one of the boxes had a hole in it and asked COM to check it out: 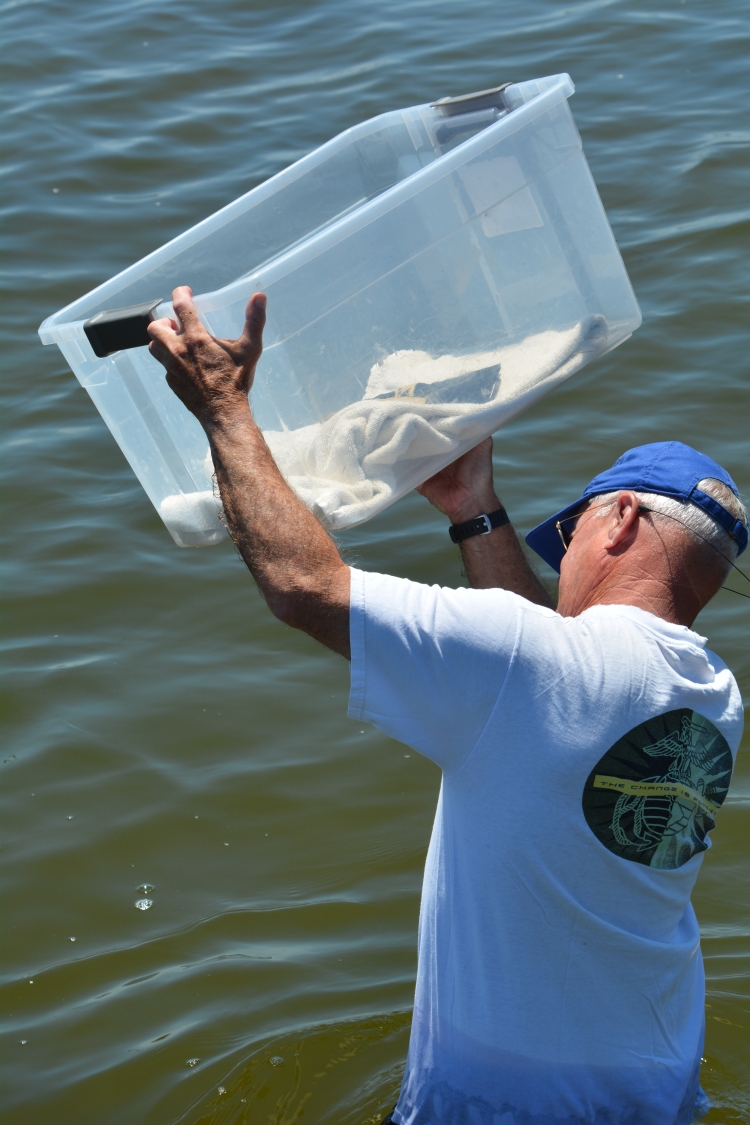 Checking the box for holes. Another mission that could have been completed on the dock!

Satisfied that the box is intact, COM brings it out to the nest:

With all the equipment in place, Craig started up the ladder.  Audrey is still very unhappy: 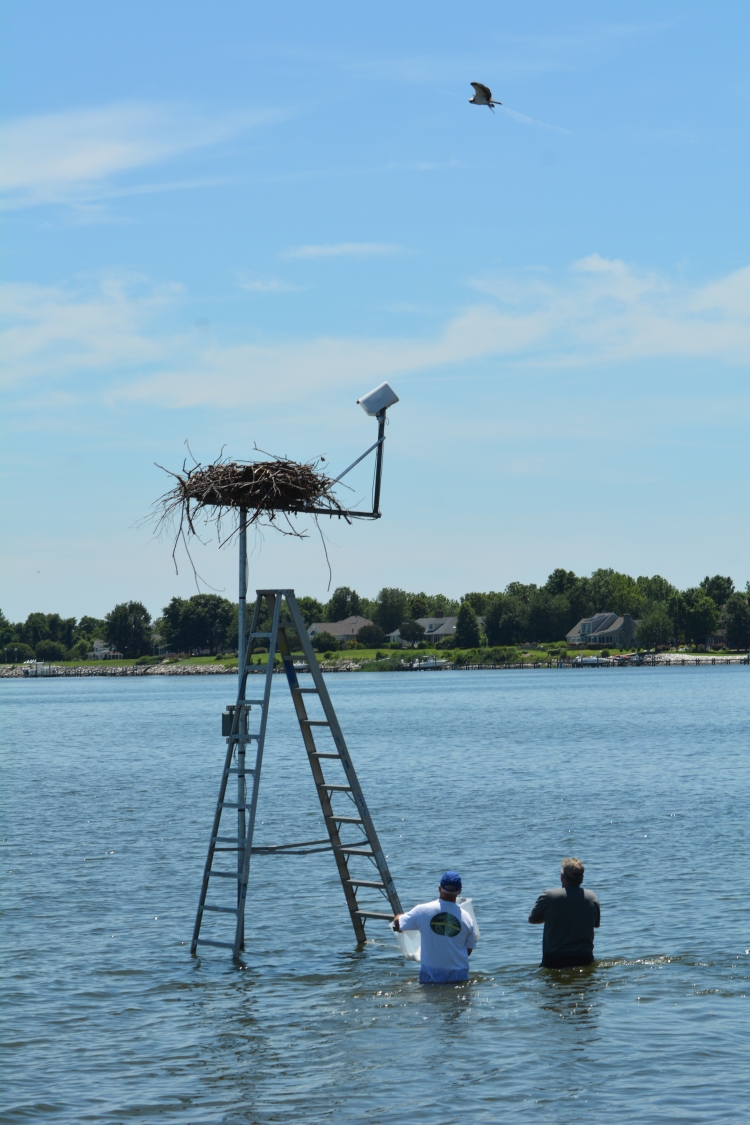 Starting up the ladder

Craig was almost there, but decided the ladder needed to be moved to be able to get into the nest safely:

Hmm, something is not right

Craig comes back down to readjust the ladder, being watched by Audrey the entire time

When Craig got to the top, he did some housekeeping around the nest so he wouldn’t get poked the eye.  Then it was time to find an osprey: 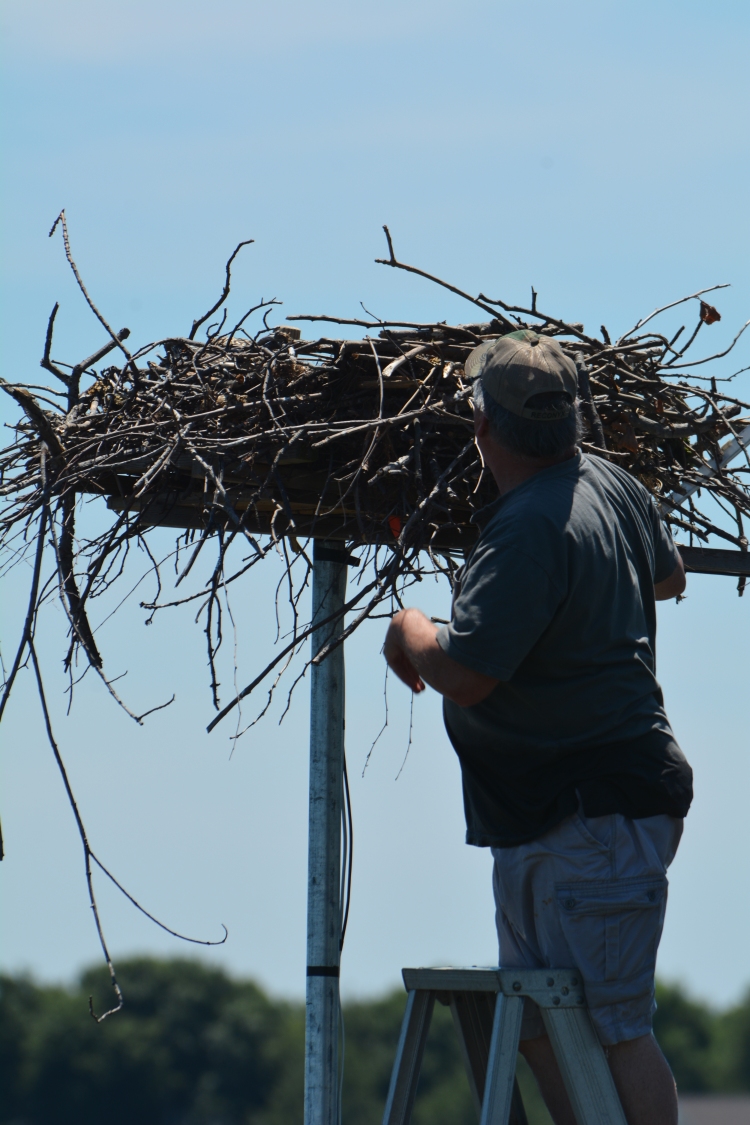 Chessie is barely visible peeking out of the left side of the nest, but she can’t hide from the raptor biologist who has come to band her 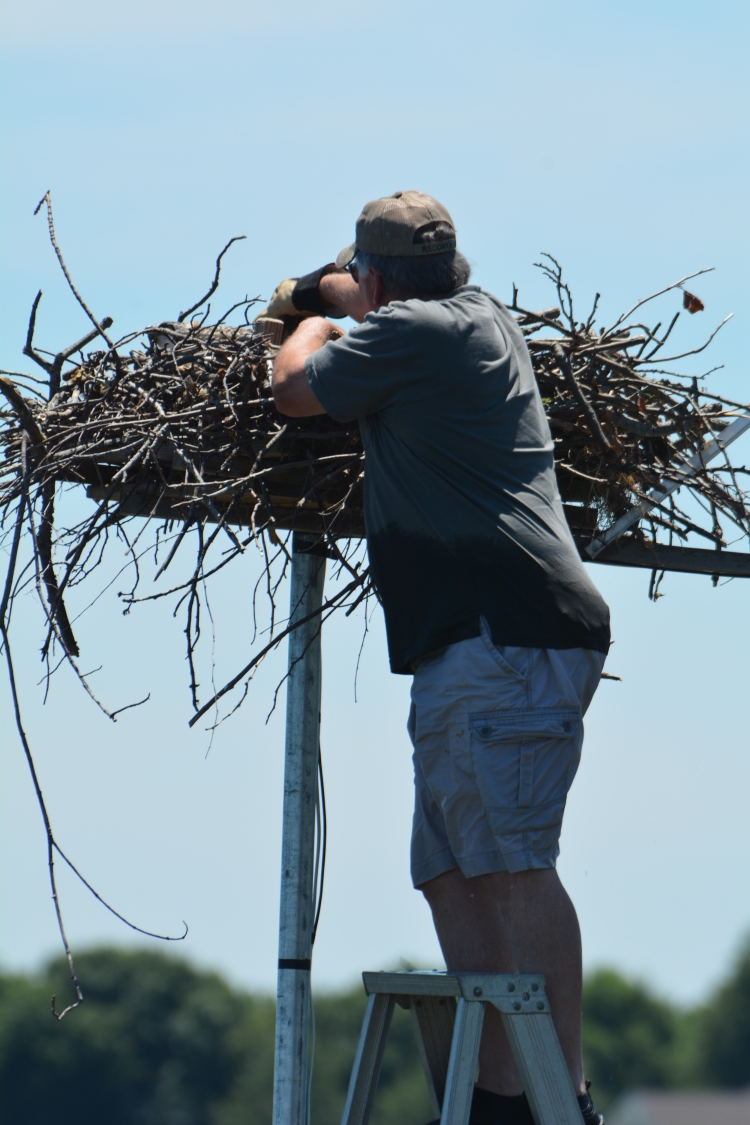 Going for the grab

Craig has Chessie by the legs.  Check out the wingspan on our little baby: 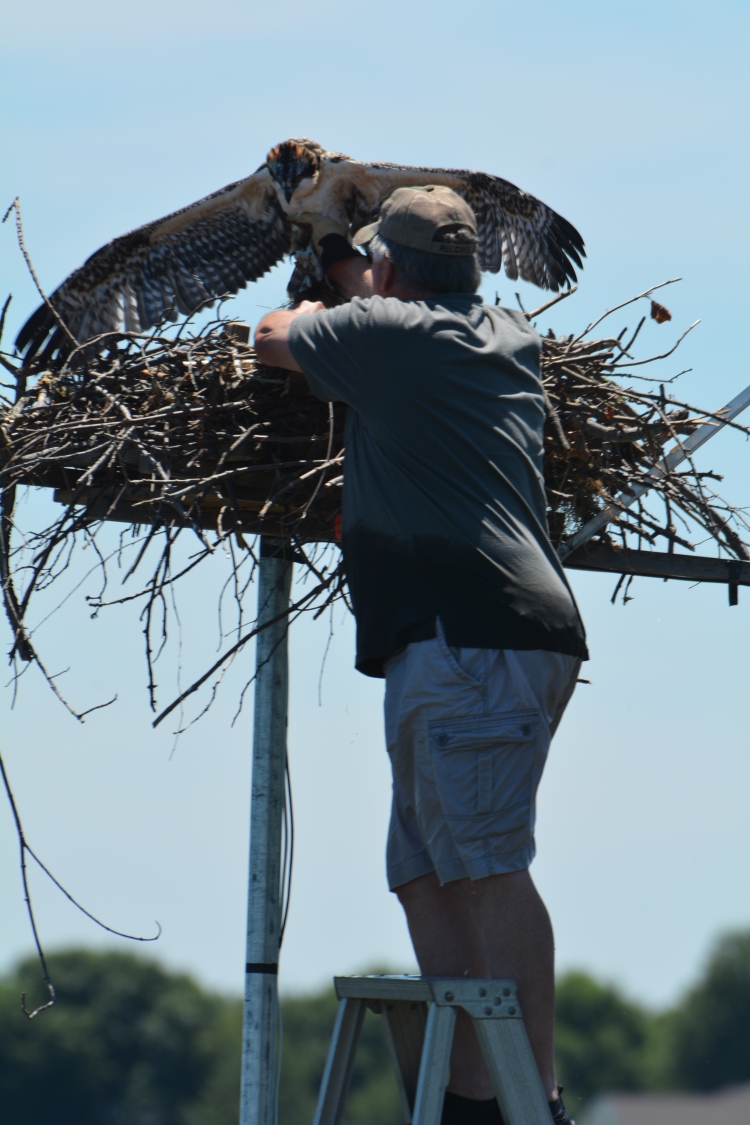 Chessie has been eating her Wheaties! What a wingspan!

Now Craig had to gather Chessie up for a safe trip down the ladder and into the transport box: 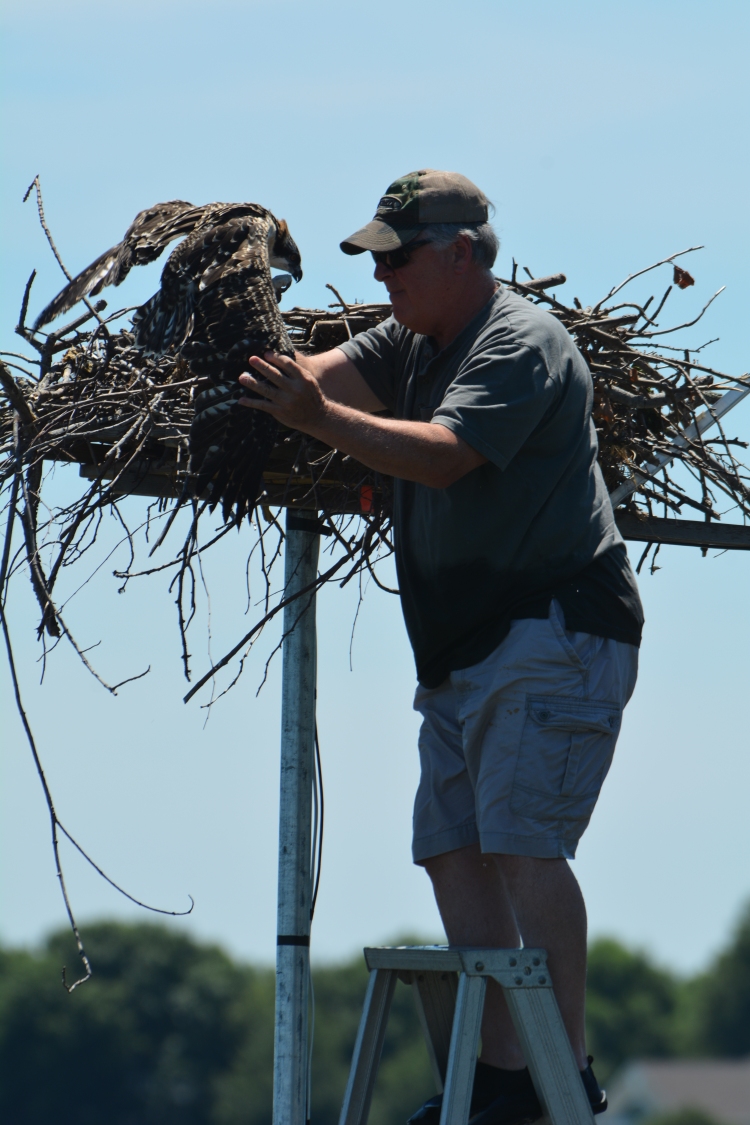 Craig prepares Chessie for the trip down the ladder 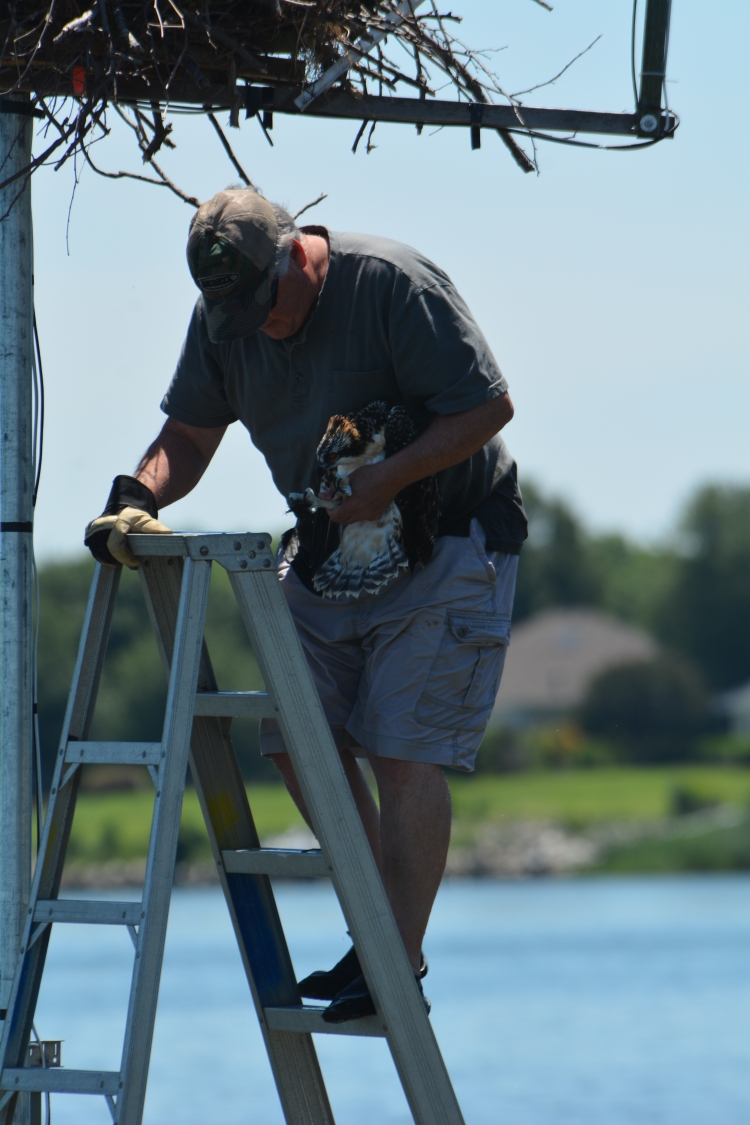 Craig gets a good hold on Chessie

COM is waiting patiently for the package

COM and Craig are admiring the beautiful Chessie

Craig gets stung by a jellyfish. Chessie is thinking it serves him right, and cheers on the jellyfish

COM is being very careful with his precious cargo. Chessie is judging how close she needs to get to COM’s thumb to have a taste

Craig, Chessie and COM arrive back at the dock.  Craig climbed out of the water onto the dock to take the transport box from COM:

Back to the dock. Chessie has taken a defensive stance

Up on the dock goes Chessie

Time to band the osprey! 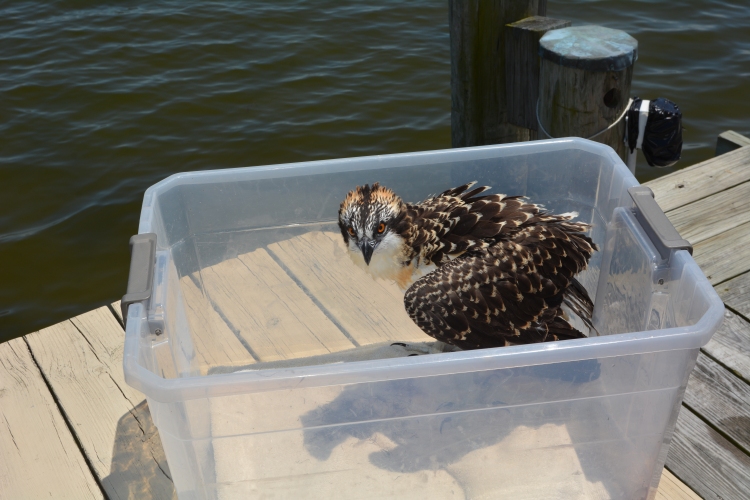 Chessie is getting braver and takes a look around 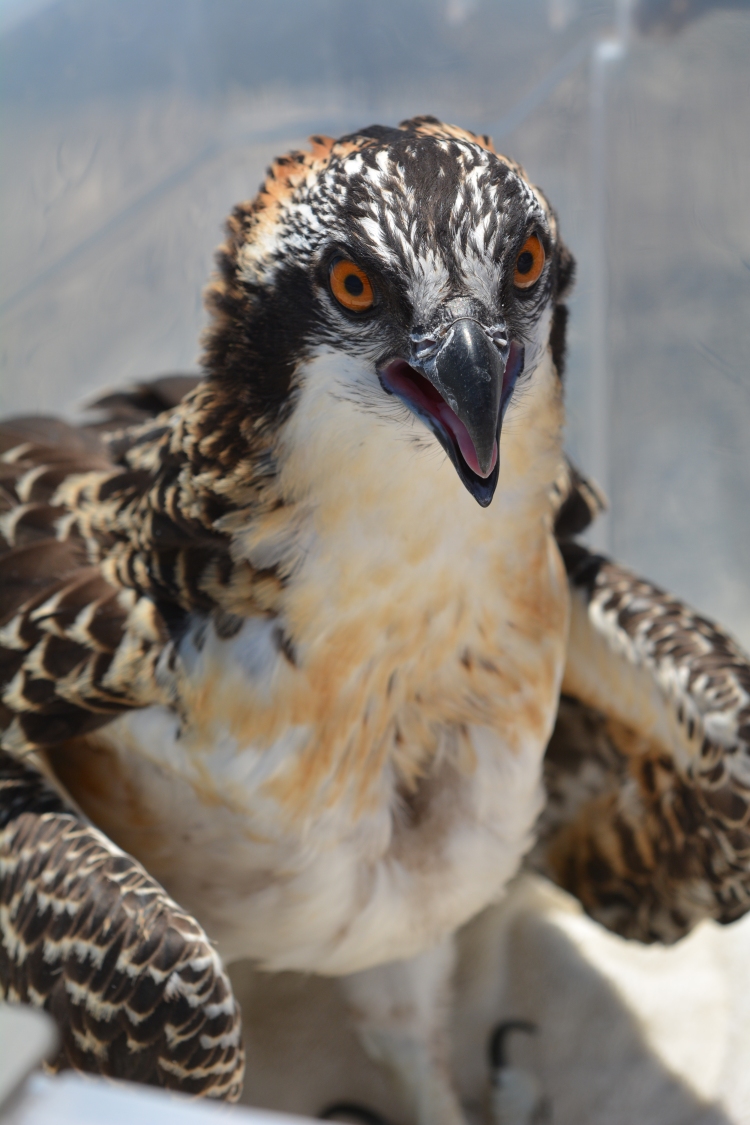 Not one step closer, you crazy camera woman!

With all the equipment ready, Craig begins the banding process, which starts with getting ahold of an osprey:

When Craig took Chessie from the box, her talons were caught so the first order of business was to release her talons from the towel:

Chessie’s talons are caught in the towel, so Craig carefully untangles her

Someone needs a manicure

Now that Chessie has been freed from the towel, the banding can proceed, but not before feisty Chessie tried to take a chunk out of Craig’s hand:

Chessie has been freed from the towel. From the look of things, I think Craig has held a bird or two in his day

Take that, you brute!  Chessie goes for blood

Craig is nonplussed, and continues his mission.  The first step is to place the metal band around Chessie’s leg: 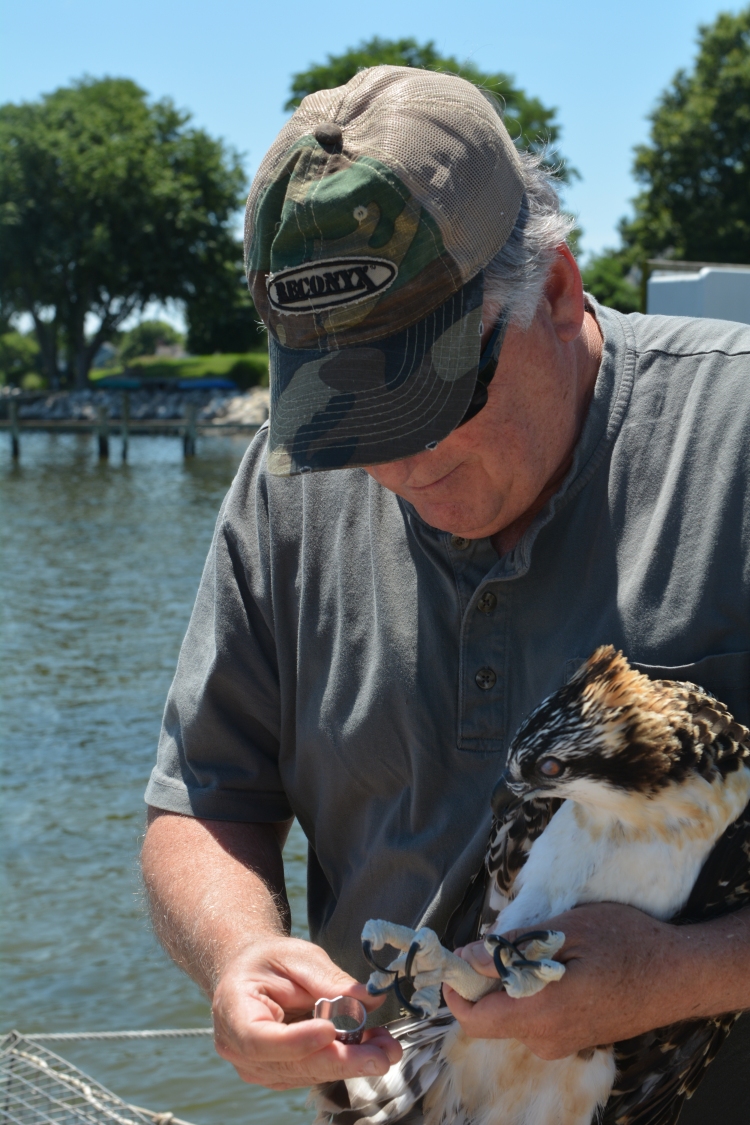 Next, the band is tightened: 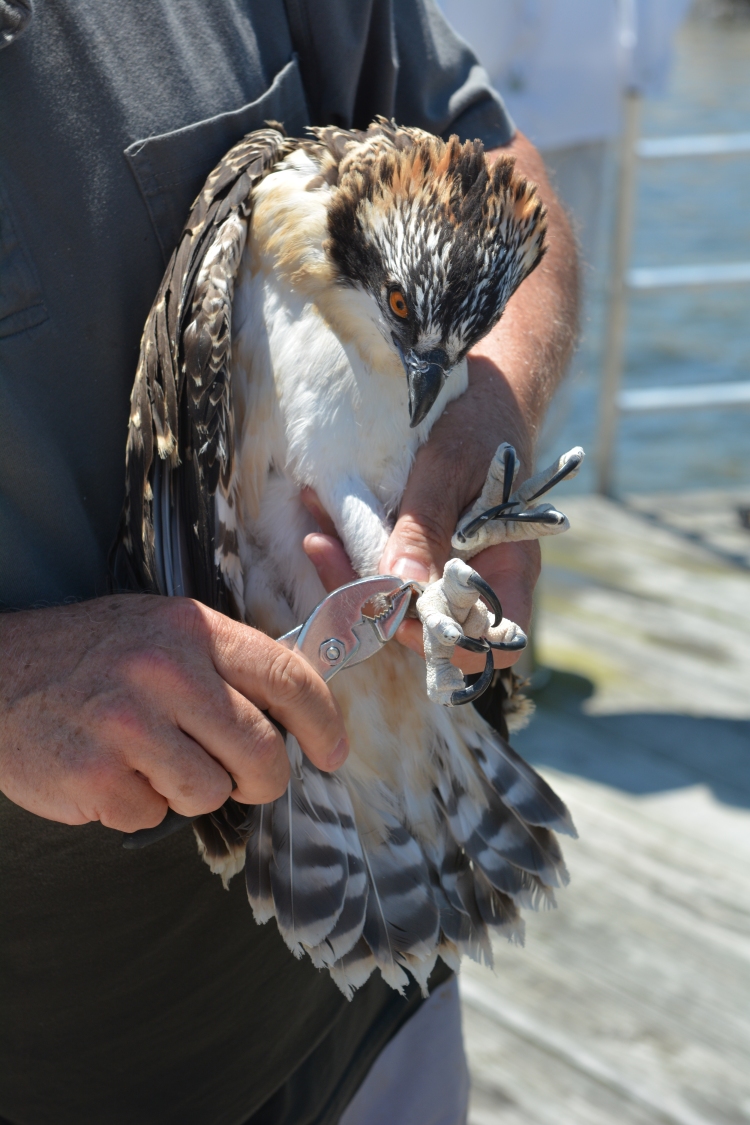 Making sure the band is on properly. Chessie is trying to read the number

Next, Craig enlists COM to help with the tape:

Craig hands the tape to COM. 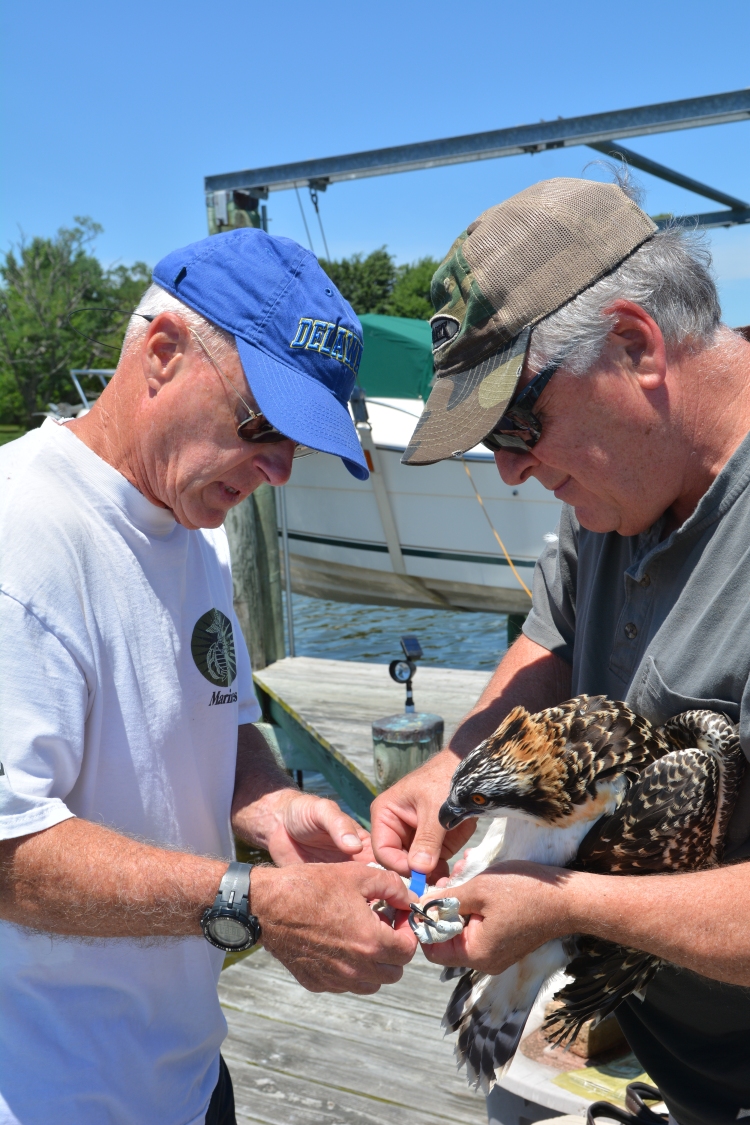 Chessie really wants a piece of COM this time

“I wonder if a piece of this one will taste better than the piece I had of the other one?”, thinks Chessie

Doesn’t COM look like he is telling Chessie he is sorry? Not sure what Chessie is thinking, but I don’t think it is good!

Now it is time to get Chessie back into the nest, but not without a photo op first:

COM, Chessie and Craig with Roger, protector of the nest. And a fine protector he is, indeed!

Chessie has really had enough of all this nonsense, and is ready to go back home.  She was none too happy being back in the transport box:

Chessie thinks there have been quite enough photos taken already, thank you very much 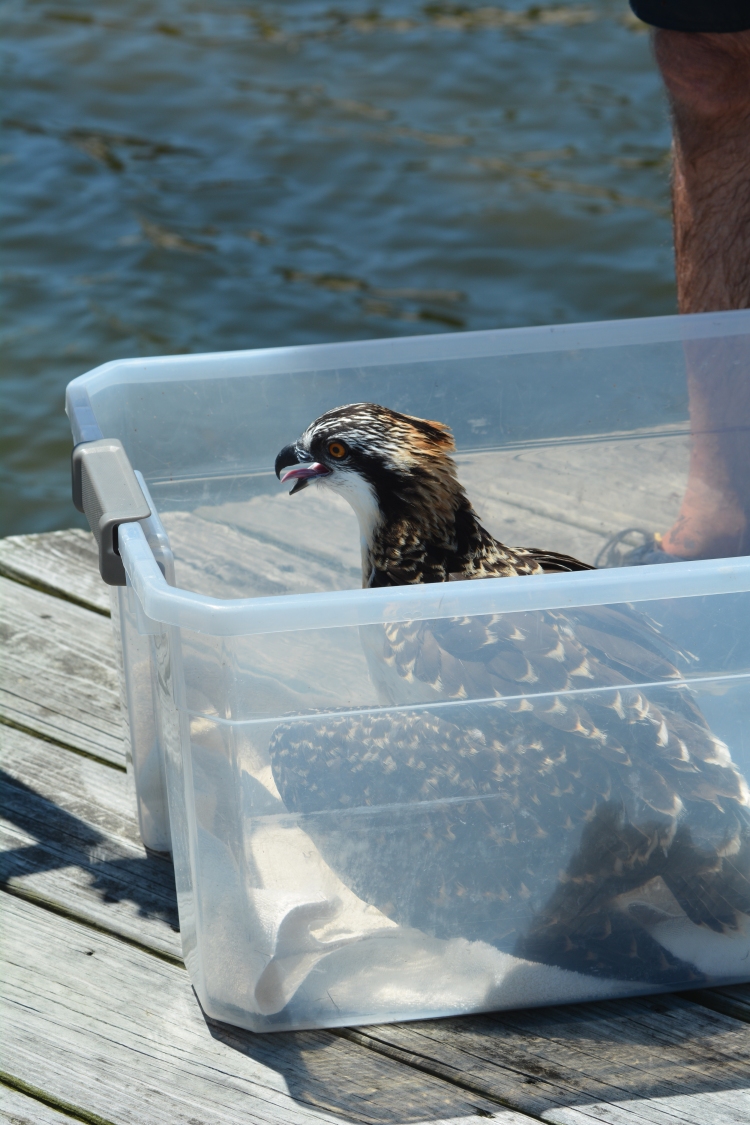 Ready for the trip back to the nest

Back into the water they go, COM with the transport box, Chessie (who is just along for the ride) and brave Craig, with his camera clutched to his body to avoid the drink: 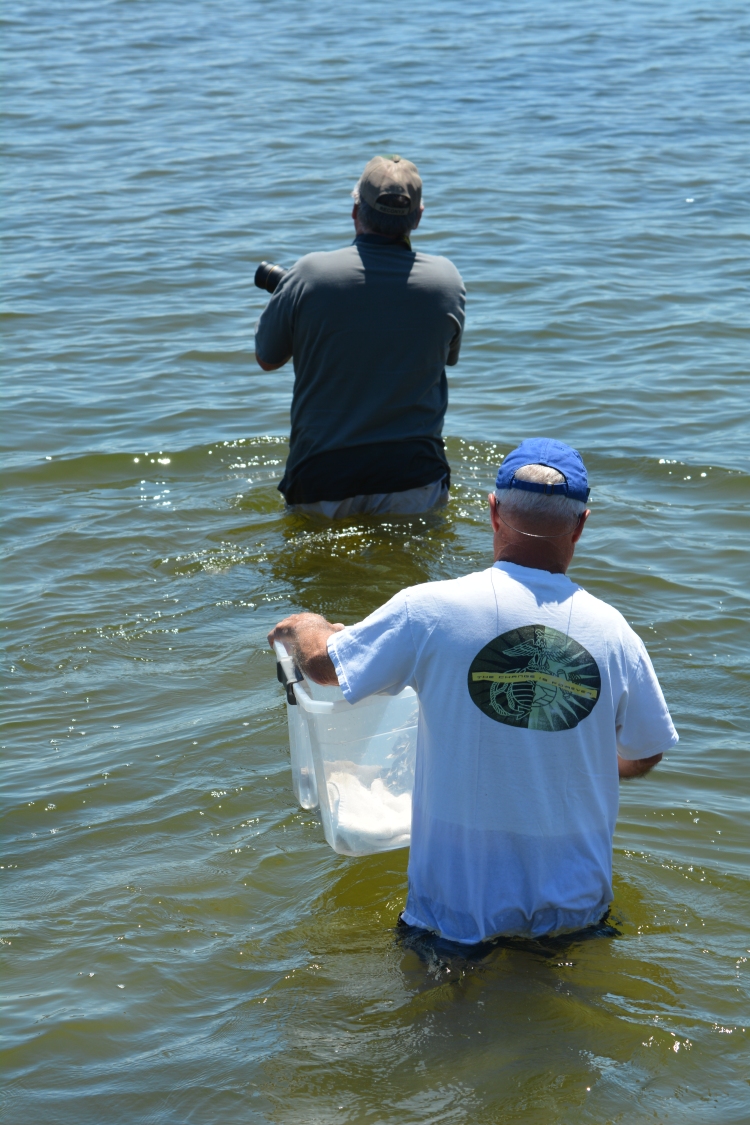 Back to the nest they go

Meanwhile, Audrey has been back at the nest since the birdnappers left with her baby:

That baby of mine needs to learn how to fly

Craig spies another photo op, and since he has his camera, decides to stop and take advantage of the opportunity:

There’s no time like the present to take a photo or two. Water, what water?

The Three Musketeers arrive back at the nest. Audrey has taken up her circling and noise making

The careful process of placing the newly-banded Chessie back in the nest commences:

The ascent back up the ladder begins 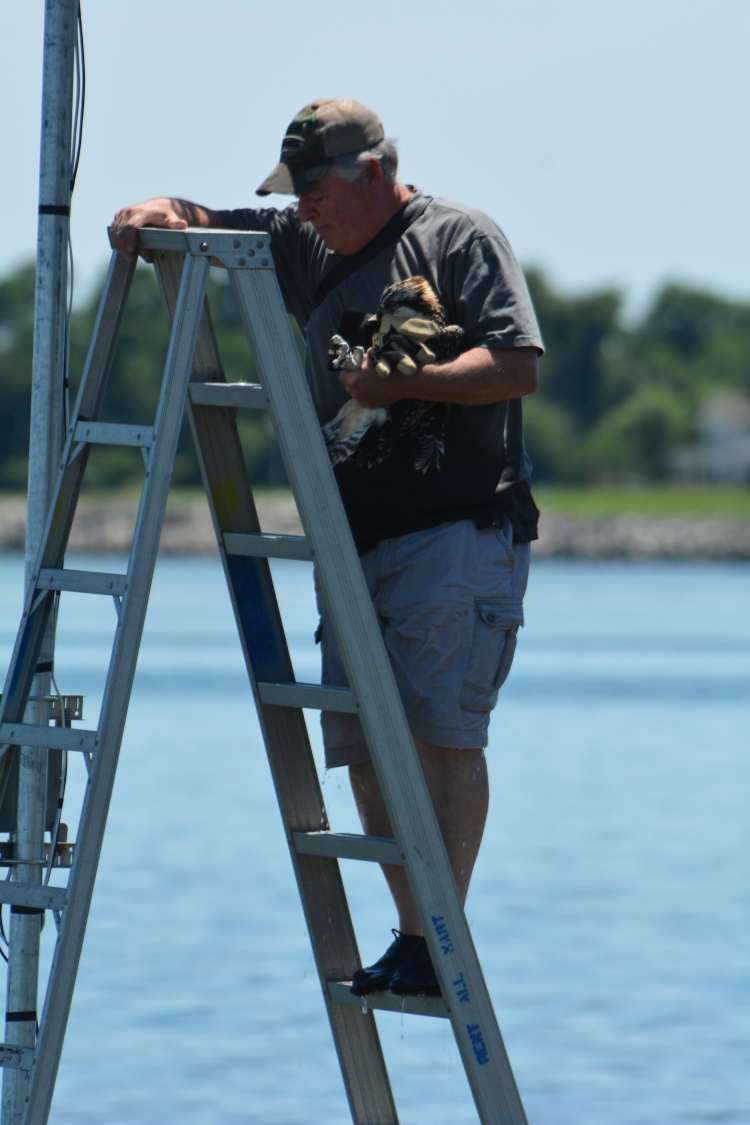 In you go, Chessie! 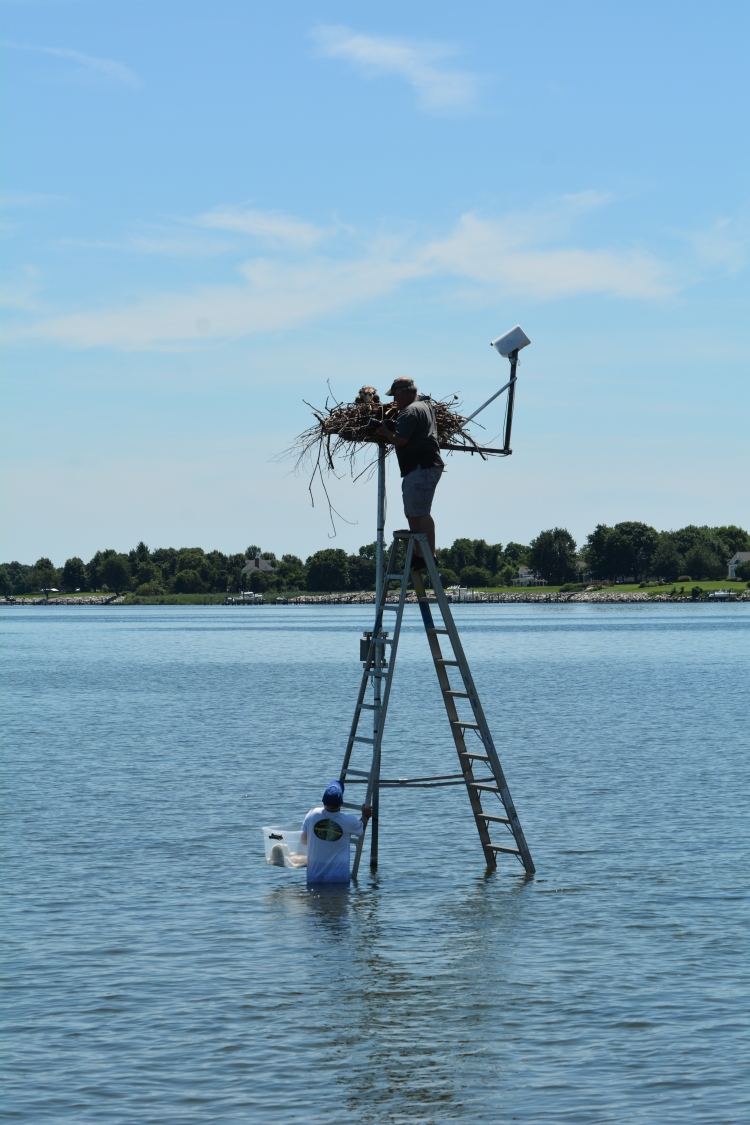 Craig’s faithful companion is below, alert and at the ready, waiting for any signs of a problem 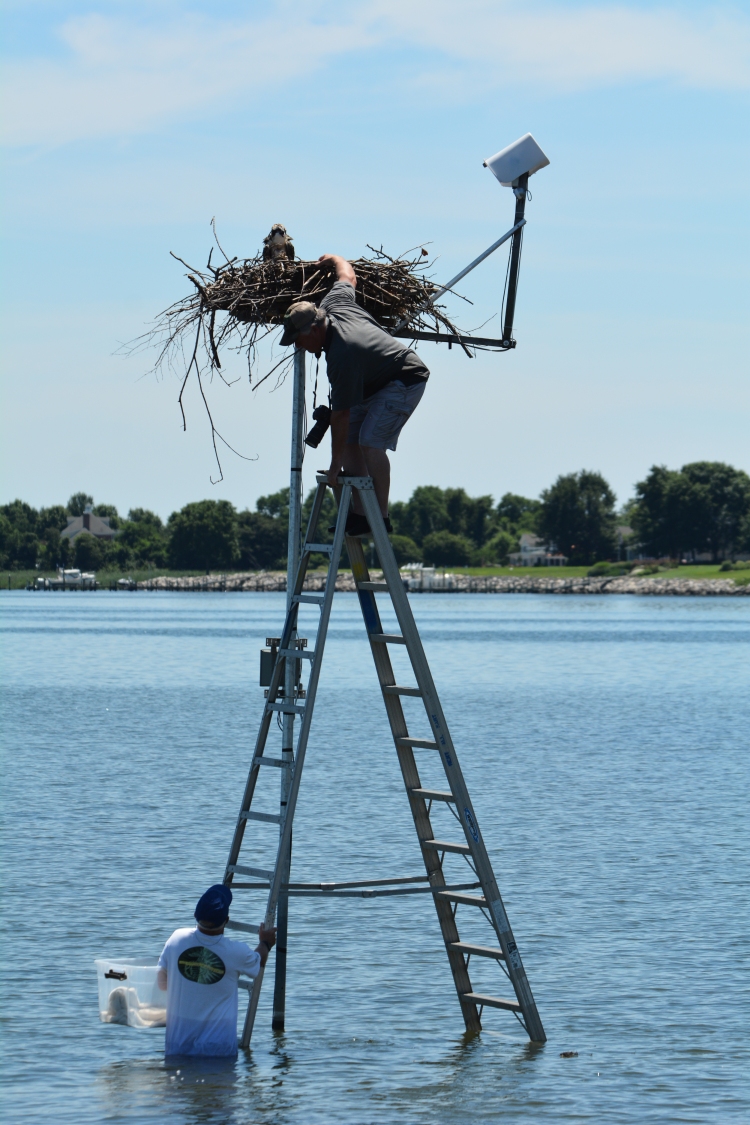 Craig begins his descent from the summit. with his camera hanging precariously around his neck just waiting for the strap to snap

Look who is still circling! Audrey is a faithful mother, but not a stupid one.  “They can’t get me here”, she thinks 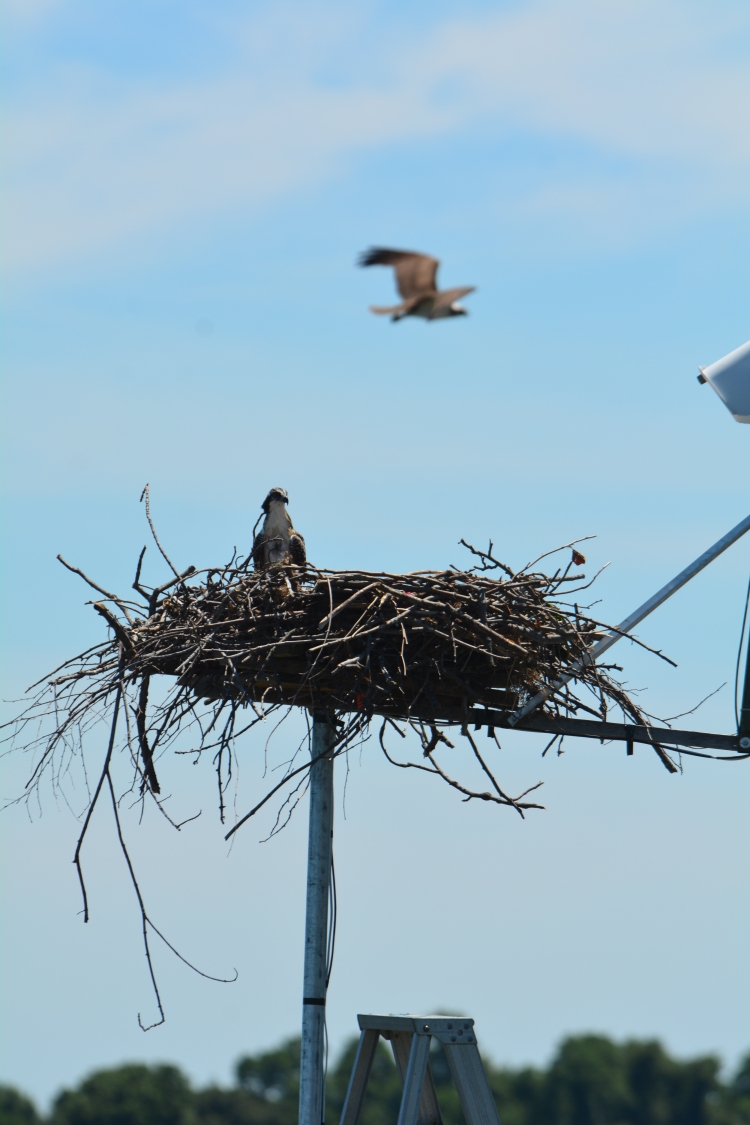 Chessie is on high alert, while Audrey photobombs Mrs. COM’s bucolic scene. The ladder is still in place

“Please get that ladder away from me, it is making me nervous”, squawks Chessie

Mission accomplished, and the equipment goes back to shore 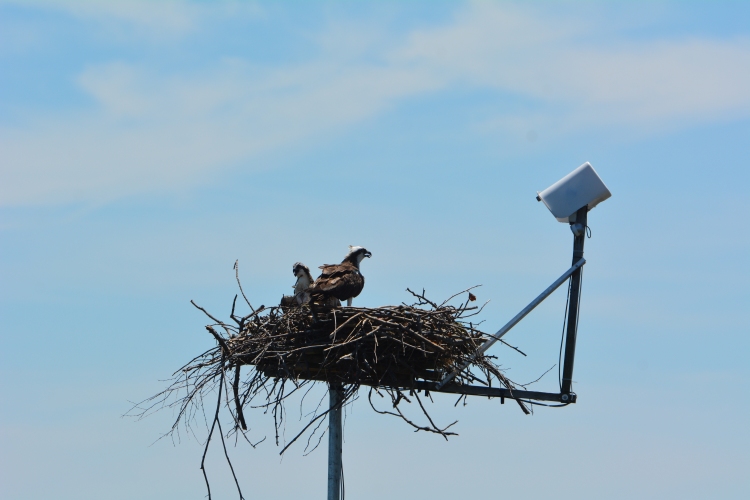 It’s hard to believe that the entire banding operation only took about fifteen to twenty minutes from start to finish.  I was so overwhelmed at Chessie’s beauty, she is simply a magnificent bird.  To my neighbors who I stood up for lunch, I hope you can now see why you dined without me at the last minute!

I have taken many more photos since the last blog was published, but will save those for next time as the hour is late.  Please remember to send in your entries for the “Where In The World Are Tom and Audrey?” contest.  You may send them to Tom_audrey_osprey@yahoo.com, along with your guess as to the date our blog views will go over 500,000.  We are over 495,000 this week, so get your guesses and photos in to win a cool prize!  Here is our winning entry for this week.  After fooling with this photo for over an hour with my technical advisor (Osprey Girl), we are unable to get the photo oriented properly, so turn your head to view it (your challenge for today!):

As always, we remain-