Good evening from the delightful Eastern Shore of Maryland.  What can I possibly say about the events of the last few days?  There certainly is never a dull moment here at the secret location. Just when you think it couldn’t get any crazier, Mother Nature does it again.  I guess she didn’t like the name of my last blog, and you really can’t fool Mother Nature.  So this whole situation is probably my fault, please accept my apology, Mother Nature!

I had all intentions of writing a nice story full of descriptive photographs about the very cool banding operation that went on here last Friday.  As you probably know, Craig Koppie, assisted by Crazy Osprey Man and friends, banded our two chicks.  The larger of the two chicks has red tape on the band.  Mr. Koppie thinks that chick is a female, so we gave her the more feminine sounding name, Montana (after all, it does end in an “a”).  The yellow banded chick is probably a male, so by default he is now known as Maine. These names were nominated by members of the Chesapeake Conservancy’s Osprey Club after two nests in (you guessed it), Maine and Montana, and were voted on by the osprey-watching public.  None of the eggs or chicks from those two nests survived, so the names were chosen in their memory.  Thank you all for voting. Yes, I had suggested Oliver and Annie in an earlier blog and still like those names, but Maine and Montana are great names and a tribute to all the chicks that will not be making the trip South this fall.

So, as I was coming up with a catchy title for the banding blog (and I still intend on using the great name that popped into my head), something extraordinary happened at our nest.  Sunday afternoon, as many of you were watching our ospreycam, a visitor appeared at the nest.  It was a young fledgling who had probably just taken one of his (my choice of pronouns) first flights.  As I have mentioned in the past, there are many osprey nests surrounding our neighborhood.  We theorize that when the chick took this flight, possibly even his first flight, he landed in our nest by accident.  Over the years, we have seen newly fledged chicks end up in some unusual locations. The appearance of a third chick did not go unnoticed by our astute blog readers and camera watchers.  The newbie caused quite a stir and it didn’t take long for my email to light up with blog comments (I do read each and every one).  I called a couple of neighbors who have nests near their homes to see if anyone was missing a fledging, and then contacted our osprey experts.  Here is an excerpt from my email to them:

A wayward fledgling landed in our nest!  So now we have three young ones in the nest!  I wonder if the interloper will leave?  Audrey has been feeding the new arrival, much to the chagrin of the camera watchers/blog readers.  The comments are on fire!!

Here is the response from our ever-clever Dr. Spitzer:

Yes.  “Visitation” occurs among adolescent ospreys–and they are often tolerated.  Surely many of your watchers have kids, and can relate to this?  (Though they don’t feed their friends Raw Fish.) So your Osprey Cam reveals more Osprey Science, and the range of “Normal” behavior.

So it is good to know that Dr. Spitzer feels that having a third youngster show up is normal.  It may be normal, but it has never happened to us in the twenty years we have had our nest.  When I looked out on Monday morning and saw Number Three take a short flight and come right back to our nest, I knew E.T. was here to stay. I refer to him as E.T. until we figure out what to do for a name.  There have been mixed reactions from our blog commenting crowd, ranging from those of you that are very welcoming to our new buddy to those of you who wish E.T. would phone home for directions and head out.  But like it or not, he is here to stay (I am choosing the masculine pronoun for convenience sake, not because I know his true gender).  I am not saying he is a welcome addition to everyone, but everything should work out fine in the end.  Tom has been a fantastic provider, and I think the fish will just keep on coming!

When Craig Koppie was here on Friday, he told us that he thought Maine and Montana would be flying within two weeks of the banding, which was July 17.  We have been seeing some flapping going on, so Mr. Koppie is right on target.  My uneducated opinion is that E.T. is probably no more than a couple of weeks older than our chicks, so Maine and Montana should be right behind him and close to fledging.

There have been many questions popping up in the blog comments, and I will try to answer some of them.  A recurring one concerns the true identity of our chicks, specifically if they are blood siblings or not.  We asked Mr. Koppie that question, and his response is that there is no way to really tell (short of DNA testing, I suppose, which is not and will not be an option).  I will ask him about the chicks at the foster incubation nest when next we meet, which should be soon.

I want to share a couple of quick stories with you.  We have the advantage here at the secret location of being able to see a panorama of what is going on outside of the nest.  E.T. has mastered the art of flying quite nicely.  When he is not in the nest, one of his favorite spots is the swim ladder on our neighbor’s dock two houses to the south of us.  Another preferred spot has become the electric box on the end of our dock, one of Tom Number Two’s favorite dining locations.  I can usually spot E.T. somewhere in the area if he is not in residence.  But when Tom comes flying back to the nest with a fish, no matter where E.T. is, he comes blasting back to the nest like a man (bird?) with a mission.  It is quite comical to see him screaming across the water as fast as he can fly to get back to the nest for chow.  He reminds me of a dog or cat running to the food bowl when you start rattling the kibble container!

The other interesting tidbit I wanted to point out is something else I have never seen before this week.  Tom has brought a couple of fish back to the nest that have been the top half with an intact head to the middle, and not the usual back half complete with tail that we usually see.

Here are some photos that were mostly taken since the last blog was published.  Remember, you can click on each photo to enhance your viewing pleasure.  I hope you like them!

Our regal Calico Tom sitting in the scraggly stick tree one house to the north of us.

These next three photos were taken before the last blog was published, but I like them. You can really see the chick’s heads in the second one:

Audrey feeding the chicks while Tom surveys his kingdom 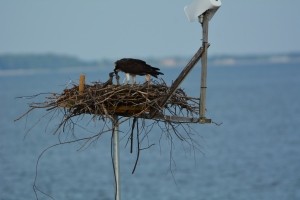 Many of you have commented about possible intruders disturbing our osprey family.  There are many different reasons for the commotion you sometimes see and hear in the nest.  Here is an example of what might be going on around the nest to cause the alarm: 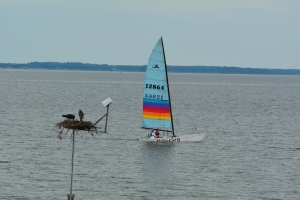 A reason for the alarm to go out and the chicks to hit the deck.

I am always on the look out for interesting photograph opportunities to share with you.  I snapped this photo of Tom on our next door neighbor’s dock to the north of us.  His catch did not go unnoticed by a hungry gull:

I guess I got too close for comfort, and Tom took off with his fish to our next door neighbor’s dock on the other side of us:

Tom on our boat lift with a hopeful crow. “Surely there is enough there for me” thought the crow.

It has become a tradition for the Crazy Osprey Family to host the good folks from the Chesapeake Conservancy at a happy hour dock party. We ended up with twenty six people at the end of the dock, and fortunately, no one in the drink.  Here is a photo from that event that took place last week.  You might recognize the electric box and boat lift from other photos:

Third Annual Happy Hour Dock Party with the folks from the Chesapeake Conservancy. Tom, Audrey and the kids were watching from nearby.

Here is a photo of E.T. getting ready to land in the nest and upset the proverbial apple cart: 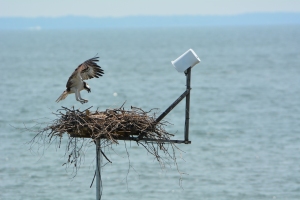 We have had some really uncomfortable weather, but Audrey sure knows how to shade’m:

E.T., Maine, Montana and Audrey waiting for a fish dinner

Our “Where In The World Are Tom and Audrey” winner for the week:

A lovely artistic photo submitted by Lombard Hardware in Baltimore while watching the ospreycam from the beach in Ocean City, Maryland

Remember to submit your entry to “Tom_audrey_osprey@yahoo.com and you may be the next winner!

I think that is enough for tonight.  An early wake-up, work and the almighty dollar will be calling in a few hours.  Until next time, we remain-