Good evening from the breezy, no, that would be windy, Eastern Shore of Maryland!  Well, I guess there is never a dull moment here at the secret location.  Just when we were looking forward to a nice, normal third season, BAM!  The drama is starting early this year.  After Audrey returned from her winter vacation a little earlier than last year, we were all waiting with bated breath for the return of her faithful companion, Tom.  But lo and behold, a great osprey mystery ensued! 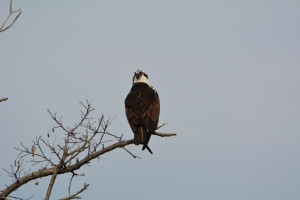 Audrey waiting for her Prince Charming

As most of the regular blog readers and ospreycam watchers are probably aware, there have been many questions as to the true identity of our male osprey this season.  I have conducted a detailed analysis of Facebook postings and blog comments, and consulted with Dr. Paul Spitzer and Dr. Rob Bierregaard.  In addition, I have spent many hours (which I don’t have to be looking at birds) observing the ospreys at our nest.  Here at the secret location, we have the advantage of being able to view images from the nest directly from the camera without the images coming across the internet.  Our enhanced view makes it a little easier to ascertain subtle differences between visitors and residents at the nest.  So here is my unscientific analysis. Remember, you can click on each photograph to enlarge it for your viewing pleasure:

3/16/2015:  Audrey arrives back to the secret location, and begins nest building the same day.

Audrey in her stick tree where she breaks off sticks in flight and takes them to the nest. 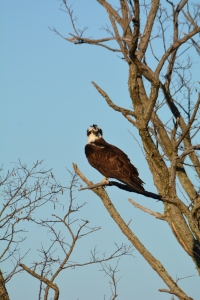 3/23/2015:  By this time, Audrey has been busy building her nest solo, and it looks really good for so early in the season.  A visitor to the nest arrives.  This visitor is solid brownish/black like Tom.  Tom, is it you?

For a few days, we do not see the dark male return to the nest very often.  This is not the normal behavior for our returning Tom, who could usually be found either in or near the nest .  He does, however, manage to be there for the Baltimore, Maryland Channel 13 interview and taping that took place on 3/25 at the secret location.  Joel Dunn, Executive Director of the Chesapeake Conservancy, was interviewed by Alex DeMetrick, a reporter from Channel 13 and the interview was broadcast later that day and the next day.  Tom, is it you?

Audrey and the dark stranger make an appearance for the camera

3/27/2015:  A screen shot posted on Facebook shows Audrey and the solid color male “rolling in the hay”.

3/29/2015:  A screen shot posted on Facebook shows Audrey and the solid color male “in delicato”. 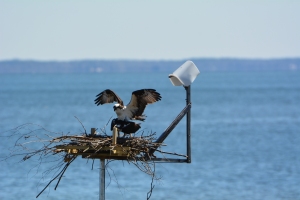 Audrey and the dark stranger during one of their last interludes. Can’t a couple get a little privacy around here?

3/30/2015:  A screen shot posted on Facebook shows Audrey and the solid color male on the nest smoking a cigarette (only kidding, but you catch my drift).

4/1/2015:  A different male is seen in the nest.  Photos posted on Facebook show an obviously different feather color, with the male looking very mottled.  Audrey and the mottled male mate frequently over the course of the day, but she does not seem pleased.  She bites at the mottled male, which is a behavior we have not seen before from Audrey.  Based on Facebook and blog comments, there is much consternation about the identity of this male.

4/2/2015:  The mottled male continues to copulate with Audrey, and she continues to thank him for his lovemaking by biting and pecking at him.  Something is amiss!  Osprey experts need to be called in for a consult.  The Crazy Osprey Family contacts Dr. Spitzer and Dr. Bierregaard.

On April 3, we received responses from Dr. Spitzer and Dr. Bierregaard.  Here is a portion of Dr. Spitzer’s response:

“The ospreys are back, bearing spring on their long graceful wings. In fact many have been back for awhile, and have endured some very chilly weather.  They are fresh from the tropics, and as a human I do not relate well to the sudden end of their warm “separate vacations” (a human frame of reference).  Why come back so early? Charles Darwin found the key 150 years ago, when he began to explain “evolution” by “natural selection”.  This is about passing on osprey genes.  You must reclaim your nest and your mate as soon as possible, to avoid contention for both.  My sources tell me “Tom” showed up late; and now he has been usurped by a New Male whom I will call “The Calico Cat”.  Calico displays a remarkable patchwork molt of new dark and old bleached body feathers.  The bleaching comes from Bay summer sun, plus those long tropical interludes; and perhaps from constant immersion in water.  We have contacted experts on avian molt (there are such specialists!) for their learned opinions about Calico’s very unusual mottled appearance.  (Most ospreys by contrast appear dressed in deep rich brown for a formal masquerade ball, including mask.)  We’ll let you know what they say. As to osprey ethics–that is a human cultural perspective.  These are NOT little people in feathers.  The fittest creature is the one whose genes fly into the future (by natural selection), and Calico is the Osprey of the Hour.  Although he does look a bit Punk. Remember:  Ospreys have also evolved sequential nestling starvation (brood size reduction) when there is not enough food.  BUT–they do not overpopulate, outstrip their resources, and die in famines.”

Dr. Bierregaard also gave us some very useful input.  When asked how long it would take for feathers to take on a mottled appearance, he told us at least a year.  We told him what was going on at the nest, and this was his response:

“Ah, the spring Osprey soap operas! Yes, that was a different male—the feathers don’t fade quickly, so you’re right—this is a new guy. When one bird in a pair doesn’t survive the migration cycle, the drama can get very intense as pretenders to the throne vie to fill the vacancy. We had a nest in NH a couple of years ago where the regular male didn’t come home. The old female did and suffered through the fight with 3 males trying to claim the nest. They were all copulating with her and spending so much time fighting that they didn’t feed her or do much of anything in the way of nest building. So the platform was pretty much a sheet of plywood with a few sticks on it. The female kept laying eggs, but the males would kick the eggs out of the nest (they weren’t sure whose eggs they were). That year was a washout. But the next year, all was well. Apparently during the first year the contending males sorted it out, or 2 of them didn’t make it through the next migration cycle, or something. In any case, for the last 2 years the old female and new male have been successfully cranking out young. In fact, we’re planning on tagging the new male at that nest this spring.”

Based on what I have observed for the past few days and input from our resident osprey experts, I believe we have a different male now occupying the nest.  As Audrey has now had osprey sex with the dark stranger and the current mottled partner, the title of this blog seems quite appropriate.  But in our little osprey world, the male will always be Tom, and our female will always be Audrey.  That’s how it has been since 1995 when our first ospreys came to stay, and that tradition will carry on here at the secret location.

Last season, Audrey’s three eggs were laid on 4/15, 4/18 and 4/21/2014.  The eggs hatched on 5/24 and 5/27/2015.  The nest is looking good, and ready for some egg action.  Audrey has been bringing in soft nesting materials to line the nest, most of which has been clumps of grass clippings.  COM’s spring sticks, gaily festooned with yellow construction tape for the Easter and Passover holidays, can been be seen in the nest.  Keep an eye out for the next color sensation!

Thanks to everyone for all of your input about our current dilemma.  Until next time, we remain-

Remember to join us on April 16 from 4-6 p.m. at Pusser’s Caribbbean Grille Restaurant, Annapolis, Maryland for the third annual Welcome Back Osprey party.  Members of the Osprey Club are invited to hear Dr. Rob Bierregaard speak about his osprey tagging studies.  The Chesapeake Conservancy folks and The Crazy Osprey family will also be there to meet you.  You may join the Osprey Club and sign up for the party at the Conservancy’s website or Facebook page.

If you are enjoying the osprey camera and blog, please consider a donation to the Chesapeake Conservancy so they are able to continue supporting programs such as this one.  Go to http://www.chesapeakeconservancy.org today.  Thanks very much!