Good evening from the lovely Eastern Shore of Maryland! As many of you had noticed, the camera was being contrary for a couple of days, but all seems well now. Fortunately for COM, the problem turned out to be internal, so he didn’t have to go up the pole in the bad weather. It was fun to watch our ospreys in action today, so I thought I would share a little of the happenings that you couldn’t see. Some of you were wondering where Audrey was most of the day. Well, here is a clue:

Just so you know that the fish was fresh: 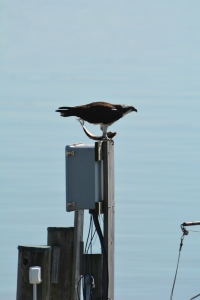 Is The Fish Fresh?

Ugh, I always find it a little disconcerting to watch one of our osprey friends ripping into the head of a still live, flapping fish. Survival of the fittest, I suppose! Audrey spent most of the day on the electrical box at the end of our dock. Her lunch attracted the attention of many a bird beggar, crows and sea gulls to be exact. At one point I looked out, and there were two crows and five gulls sitting on the boat lift, dock and in the water. They were just waiting for Audrey to drop a tender morsel, and she obliged them on a number of occasions. One of the gulls kept making me laugh. It was swimming in the water just under Audrey, and looking up at her very quizzically as if to say, “Hey, look down, I’m here! Sister, can you spare a fish?” I chuckled for a good long time at this comical gull and the patience it showed waiting for Audrey’s spoils. The crows were quite obnoxious and kept dive bombing the feasting Audrey. She seemed quite nonplussed by all of the commotion around her, and kept munching away at a steady pace.

Some of the marauding gulls-Audrey could care less

This is the gull that had me chuckling. A crow friend is also waiting for a handout 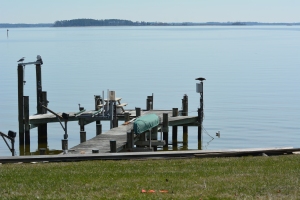 This is a good perspective of Audrey on the electrical box and my gull friend. One of COM’s marked sticks is visible in the back yard waiting for pick-up

While all of the eating and plotting to eat was going on, Tom was quite the busy little man. You could probably see him on the camera bringing back sticks and arranging them just so. He picked up several of COM’s sticks out of the back yard, but none of the two marked ones that are out. On one stick hunting pass, Tom grabbed a branch off of a tree in our next door neighbor’s yard to the north, which was one of his favorite stick lockers last year. I also saw him snag a floating hunk of grass out of the water and bring it back to the nest, which is really starting to take shape. Audrey was not helping out much in the nest building category today, but that is okay. It won’t be long until she won’t see much time out of the nest, so I guess we will give her a nest building pass for today.

Audrey sat on the electrical box for a good portion of the afternoon. She ate at a good constant pace for a long time, then just sat and enjoyed the afternoon, all the while clutching her partially eaten fish. Later on, I saw her and Tom fly over to our next door neighbor’s dock just to the south of us. Audrey sat on a piling, still hanging on tightly to her fish. Tom plopped down on the dock next to her, trying to figure out how to get his share of the fish. I went out to take some photos, and as I inched closer, they both decided they had enough of me and took off.

Audrey with her remaining chunk of fish as Tom waits for his turn. They are one dock to the south of us

Audrey heads back to the nest

So I hope this helps the worriers out there to know that Tom and Audrey were safe and sound today, doing what ospreys do-fishing, eating, collecting sticks, building nests and making baby ospreys.

Until next time, we remain

Don’t forget about the Welcome Back Osprey event on Thursday, April 17 in Annapolis, Maryland. Members of the Osprey Club will be treated to a lecture by Dr. Paul Spitzer at 3:00 p.m., which will be followed by festivities open to the public from 4-6 p.m. Details may be found at http://www.chesapeakeconservancy.org.

7 thoughts on “Sister, Can You Spare A Fish?”