We’re back!! The Crazy Osprey Family would like to officially welcome everyone to Season Two of Tom and Audrey’s Great Adventures.  I will fill you in on what has been going on around the nest, or should I say pole.  Then I have a special treat from our good osprey friend, Dr. Paul Spitzer.

As you may or may not know, it has not been a very pleasant winter here on the Eastern Shore of Maryland.  After a few relatively mild winters, Mother Nature had her way with us this year.  Our osprey pole was a casualty of the ice caused by the very cold temperatures, and began to list precariously.  Our friends from the Chesapeake Wildlife Heritage came out to examine the pole, and a decision was made to replace the pole and platform.  The outside temperature was in the teens when the new pole and platform were being installed.

Our old pole had been in for many years. It needed to be removed and a new one jetted into the bottom. 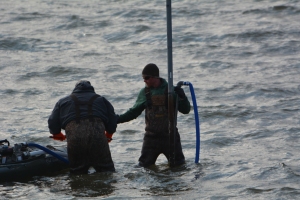 Jetting in the new pole

Once the new pole was in place, a new platform had to be built to match the specifications of the old one so the camera mounts would fit the same way. 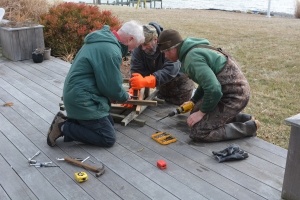 Working on the new platform-temperature in the teens

COM and Phil from the Chesapeake Wildlife Heritage took the new platform out to the pole, and COM installed it. You might recognize the stepladder from Ozzie’s rescue back in July.

There will be more to follow about our winter chores and other winter friends in coming blogs. But for now, I would like to post some information I received today from Dr. Spitzer. As I know you are all aware, only one osprey has made his/her way back to the “nest” so far this season. The weather has also been the coldest (and snowiest) we can ever remember for the return of the ospreys. Last Saturday was a beautiful day, and there were a few ospreys flying around behind the house. Our osprey engaged in some osprey wars, chasing away some of the other newly returned voyagers. When the weather turned cold the next day, we didn’t see much of any of the neighboring ospreys, including our own. The ospreys must be seeking shelter in near by woods. We certainly have not seen much of them, either on platforms or flying around, in the last few days. Today was incredibly windy, with gusts into the 50 mph range. All of the sticks that had been on the platform have blown off. But not to worry, Crazy Osprey Man has placed his prefab osprey nest sticks, some marked with construction tape, across the back yard. So when building commences, easily available materials will be at the ready!

We have been worried about how the severe weather would affect our ospreys returning from their tropical winter digs. In addition, there have been some questions about which osprey has returned. Because we have been having some difficulty deciding who is back, we decided to query our resident osprey expert, Dr. Paul Spitzer. For our new readers, Dr. Spitzer is an ornithologist who has conducted years of research on ospreys and their behavior. We are very fortunate to have him as our very own consultant and friend. We had several questions for Dr. Spitzer, and here is his response to our inquiries:

I’m focused right now on my FL loon spring migration departure study at St. Marks NWR, which requires me to rise at 5 AM every day with good weather (ow!). It was 41 degrees F on the Gulf at dawn, so even down here at 30 degrees N latitude we’re not totally into spring yet…. I did tally 20 northbound loons.

When I’ve looked at the osprey cam, I haven’t seen the bird. A solo return will recruit a new mate. That’s how the “Osprey Culture” works, with transfer of all sorts of info re: breeding behavior, the nest site, danger from predators, friendly human hosts, and the food regime within male commuting distance.

And yes, this rotten weather slows everything down. O’s in the snow are a striking novelty; and this year there have been multiple episodes. One could do a mini-study of the thermoregulatory behavior of these earliest (by far!) returning tropical migrant birds. Early-season O’s often select roost sites out of the wind, by day and especially at night, trying to reduce convective heat loss. We human Eastern Shore dwellers have been doing the same all winter. Lacking a serious layer of body down feathers (which allows quick drying), ospreys do not have cold weather clothing. So they have to avoid the most extreme heat loss, and rely on their rich fish diet (which no one warms up for them!). The idea of returning from their extended tropical vacation to THIS has always struck me as one of the least enviable aspects of being a breeding adult osprey. In their first year of life, the juveniles just stay in the tropics. In their second spring, most return, but not early–they don’t compete with the established breeders, and many wander around the East, going on tour you could say. Then multiple additional springs may pass before they commit to breeding. I have documented a range of first breeding from ages 3 to 7.

Timing in bird migration is powerfully shaped by eons of natural selection. (Of course this is not a Banner Year for global warming advocates!) All things considered, O’s that breed early appear to be more successful. Perhaps they are in general more robust, vigorous individuals. They are first in line to regain their nest sites and mates. But there must be a real mortality risk due to the debilitating effects of exposure. The rich abundant fish supply must be what saves most of them. Right now would be an EXCELLENT time to stay in touch with wildlife rescue outfits and avian rehabbers to learn if any ospreys are coming in as casualties of this late-season cold.

Beginning in late April, I’ll be doing an osprey feeding study in CT, at the famous colony at the mouth of the CT River. Those ospreys depend on a seasonal migration sequence of fish species, whose arrival is shaped by water temperature. My major interest there is adult menhaden, 3+ years old, which migrate north from the Chesapeake region to arrive in May. Long Island Sound is a menhaden sanctuary: My hypothesis–This colony is deriving abundant food from that protection. Mind you, I am not against Chesapeake pound-netters and Atlantic coastal bait-fisheries taking sustainable quantities of menhaden–but I want to observe the CT osprey colony under optimal feeding sanctuary conditions there on LI Sound.

Thank you, Dr. Spitzer! We look forward to your input and expertise as the osprey season here in Maryland continues and anxiously await your opinion as to the gender of our newly arrived osprey. For those of you who live in the Annapolis, Maryland area, Dr. Spitzer will be giving a talk for members of the Chesapeake Conservancy’s Osprey Club before their Welcome Back Osprey event on Thursday, April 17. Details are available in the last blog or at http://www.chesapeakeconservancy.org.

We will leave you with some photographs of our newly returned osprey. Remember, you can click on any of the posted photographs to enlarge them for your viewing pleasure: 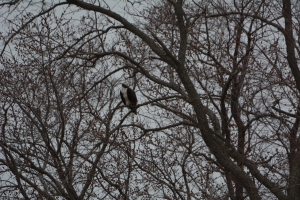 Returning to the nest before the cold and wind arrived 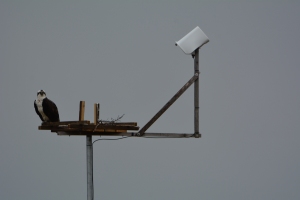 So that’s enough for tonight. Until next time, we remain

5 thoughts on “Spring Has Sprung, The Grass Has Ris, I Wonder Where The Osprey Is?”