My, my, my, what a heart pounding few days we have had here at the secret ospreycam location. Ozzie has certainly given us all some interesting moments, to say the least. She doesn’t seem any worse for wear after her Sunday/Monday ordeal. First flight seems to be only hours away for our little number three chick. Wednesday evening was quite breezy, and she was catching some good air. I thought she was going for it, as she was hovering way up above the camera several times. But back down she came every time. So close, so close! The Crazy Osprey Family is at the ready with various recording devices nearby at all times. We will keep our fingers crossed that we are able to capture the first flight.

Although Ozzie has been up front and center recently, life goes on around the nest. Chester and Essie still enjoy flying around together. They are both trying very hard to snag a fish, and their command of flight has improved dramatically. As I was outside yesterday with Crazy Osprey Man’s new fancy digital camera trying to catch some images of our feathered friends, I counted the number of ospreys visible to me at one time. There were two in our nest, probably Audrey and Ozzie. There was also one in each of the two scraggly trees to the north of our house, and six, count’m, six flying around over the water behind our house. So without hardly turning my head, I could see ten osprey in the immediate area. Osprey Girl and Crazy Osprey Man took her Boston Whaler around the area where we live a couple of weeks ago. In approximately three miles of shoreline, they counted fifteen active nests and three empty nests. Wow! The Chesapeake Bay has certainly been good to the recovering osprey population over the years.

When I wrote my last blog about The Joy of Flight, I shared some photographs of Chester with you. Osprey Girl has also shared some photos of Chester, and one of Essie on his first day of flight. The day that Essie first flew was a little different than most as far as the availability of landing places. As we have mentioned before, when the chicks fly for the first time, they will be gone from the nest for a long period of time. This has happened to Chester and Essie. The day Essie first took flight, COM was down in Southern Maryland with his boat that usually occupies the large boat lift on our dock. As the boat lift was empty, the straps were exposed to whatever happened to come along. What happened to come along was Essie, looking for a place to land on his day of first flight. Osprey Girl has told you the story and shown you one photo of Essie in his precarious position, but I am going to add a little to the tale already told.

When we first saw Essie on the boat lift strap, he was standing at a very awkward angle on the side of the strap which was hanging in an almost vertical position. Essie appeared to be in some distress. As he looked like he might be stuck in the strap, I ran down to the dock to try and help him. I called Osprey Girl to come down and help me, and as she has already told you, a thunderstorm was imminent. We tried to straighten out the strap and hold it so Essie would have something to push against to try and take off, but it was to no avail. I tried to shake him off the strap, he just held on tighter. Essie was having no parts of leaving. He did manage to get himself to the lower section of the strap that was more horizontal. We felt better about that position, as he could just perch there without having to contort himself. As he obviously wasn’t going anywhere, I decided to take advantage of his plight and take some photos, which I share with you now:

Essie-How did I get here, and how do I get out of here? 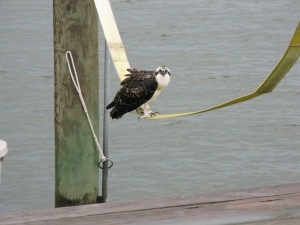 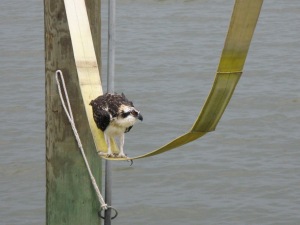 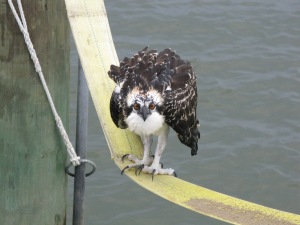 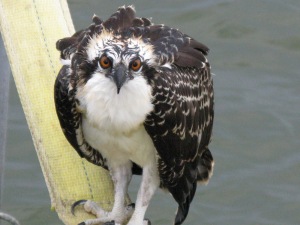 Essie-Do my eyes look red in this picture?

Here’s hoping our next blog will be the story of Ozzie the Fledging!

If you are enjoying the osprey camera and blog, please consider donating to the Chesapeake Conservancy so they are able to continue supporting programs such as this one. Go to http://www.chesapeakeconservancy.org today. Thanks very much!