Good evening from the beautiful Eastern Shore of Maryland! The heat and humidity are giving us a break, there are no storms on the horizon and the best of summer is upon us and our feathered friends.

The last ten days have certainly been exciting for all of you loyal ospreycam watchers as our chicks have begun to take flight. As with most things in life, each of us has to take the good with the bad. For the osprey addicts in our midst, the good is that two of our three young ospreys have fledged and are enjoying the wonders of flight. The bad is that Chester and Essie, and soon to be Ozzie, are spending less and less time in the nest and away from the camera. Here at the secret location, we seem to spend more time watching the comings and goings of the osprey than we did before. There is a greater responsibility in being the eyes for all of you who cannot view our ospreys through the camera. So I have a delightful experience to share with you, as well as many still photos for your viewing pleasure. As soon as I figure out how to edit and post video (thank goodness for tech savvy teenagers), there will be some live action video posted as well.

As I mentioned in the previous paragraph, I find myself spending more and more time (that I don’t have) watching the marvel of our osprey chicks’ new found flight. As I was cleaning up in the kitchen around lunchtime today, I observed all three chicks in the nest. With Chester and Essie having fledged, it is not as common to see all three of them in residence at the same time. The next time I looked out, I saw Chester and Essie take flight. They stayed close to each other, swooping and flying and gliding and having a good old time. As I watched, they continued to fly together, up and down, back and forth, like two children who are playing together. Chester and Essie would fly side by side, then part and go in opposite directions, then fly back to each other again to soar up and dive down together. Their joy in being able to fly was so evident in their actions that I couldn’t help but grin from ear to ear. I tried to get some video, but their actions were so quick it was hard to film them in a way that could be viewed without getting motion sickness! Near the end of their display of new found flight, one of the two swooped down to the water several times and made motions as if to try to catch fish. One of them ended up in the water for a heart stopping moment, but managed to flap his/her way back into the air. Chester/Essie (I have no idea which one it was) came up empty-taloned, but catching fish are definitely in their not-too-distant future. Later on this afternoon, I witnessed the same behavior again, with one of the young osprey flying very low along the water and swiping at it as if trying to catch dinner. There were many schools of fish visible along the surface of the water today, and I was rooting for the chick to bring home the bacon (fish bacon) to the nest. But it was not to be today.

I am not a photographer, but at times I try. Over the past few days, I have taken hundreds of photos with Crazy Osprey Man’s new fancy digital camera. I would like to share some of my shots with you to give the viewers an idea of where our osprey friends have been spending their time when not on the nest.

Here are some photographs of Chester at the end of our dock, on Crazy Osprey Man’s perches and in flight. I apologize in advance for the masculine reference to Chester in one of the captions, it is just way too much trouble for this technically challenged author to change it with my technical advisor already in bed: 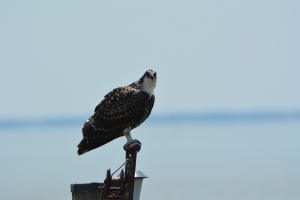 Chester-You try balancing on one leg!

Chester-Does my beak look too big on my profile? 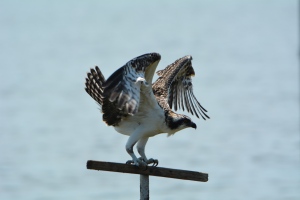 Chester on one of COM’s perches doing wing exercises 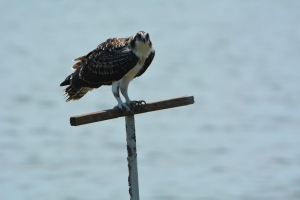 Chester on perch after exercising his wings 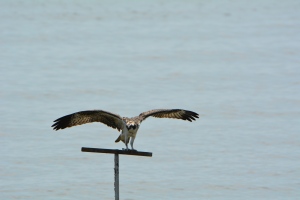 Chester on one of COM’s perches. 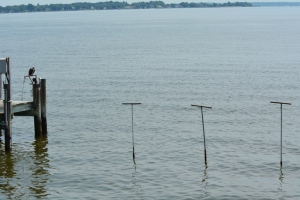 Chester-So many perches, so little time 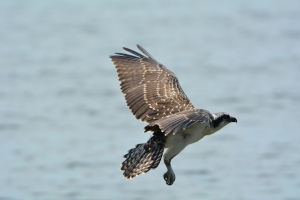 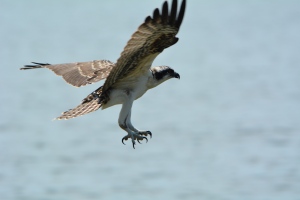 Chester-Getting my talons ready for action 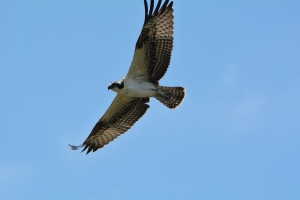 I think those are enough photos for this blog. We have many more to share with you in the coming days, including some great shots of Essie during the great boatlift strap caper that Osprey Girl wrote about in her last blog.

So goodnight from the Eastern Shore. As always, we remain: